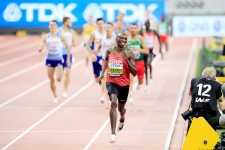 DOHA, Qatar - Timothy Cheruiyot led from gun to tape on Sunday evening to add a world 1500 meter gold medal to the silver he collected two years ago in London, finishing fully two seconds clear of an eye-wateringly good field to clock 3:29.26, half a second off his 2019 world leading mark.

In terms of intent, Cheruiyot’s victory was similar to that of his compatriot David Rudisha in the London 2012 800m final. While there was no world record, there was a gold medal won in the most committed and unanswerable of fashions.

With men like Makhloufi, Lewandowski and Norway’s 19-year-old European 1500 and 5000m champion Jakob Ingebriogtsen in the field, Cheruiyot could not afford for the race to turn into a dawdle.

It certainly wasn’t. Cheruiyot accelerated straight into the lead, with fellow Kenyan Ronald Kwemoi, the under-20 world record holder, following him – at least, initially. They went through 400 meters in 54.94 and 800 meters in 1:59.67, with the rest of the field in a separate race.

Cheruiyot pushed on hard, and by the time he reached the bell he had a 25 meter lead over a pack being led by Makhloufi and Ingebrigtsen, who had run himself into the ground in finishing fifth in the earlier 5000m final.

The Norwegian flags were fluttering in the stands beforehand, but the Ingebrigtsens’ heady global ambitions had been thwarted up to this point, and this was the last throw of the dice to earn a medal here for the family collection to add to the world 1500m bronze earned by Jakob’s elder brother Filip in London.

The leader increased his lead in the back straight, but the chasing pack began to close slightly around the top bend. There was no catching Cheruiyot, however, and although he seemed almost to shudder 30 meters from the line, he maintained his form for a first global victory.

Behind him Makhloufi headed the challengers, with Lewandowski – just as he had in winning the European indoor 1500m title in Glasgow – frustrating his young Norwegian rival once again.

Ingebrigtsen completed what has been a thoroughly frustrating World Championships for both him and his family in 3:31.70, with Britain’s Jake Wightman finishing at speed for a cracking fifth place in a personal record – and Scottish record by the by – of 3:31.87, one place ahead of compatriot Josh Kerr, who also clocked a PR 3:32.52.

“For me, it was a horrible championship,” said Ingebrigtsen. “I know it is my first big one and I am still very young, but when you feel so strong, I really wanted to go home with a medal in my bag. Everything was perfect here. I was in the best shape ever and I was here to win. It is a terrible feeling and my legs feel bad now, I feel hopeless and terrible in every way. It was just not good enough today.”

Rio 2016 champion Matthew Centrowitz, who finished 8th in a seasonal best, commented: “I wish I had a better start off the line. I was right next to Cheruiyot. We all knew what he was going to do…” 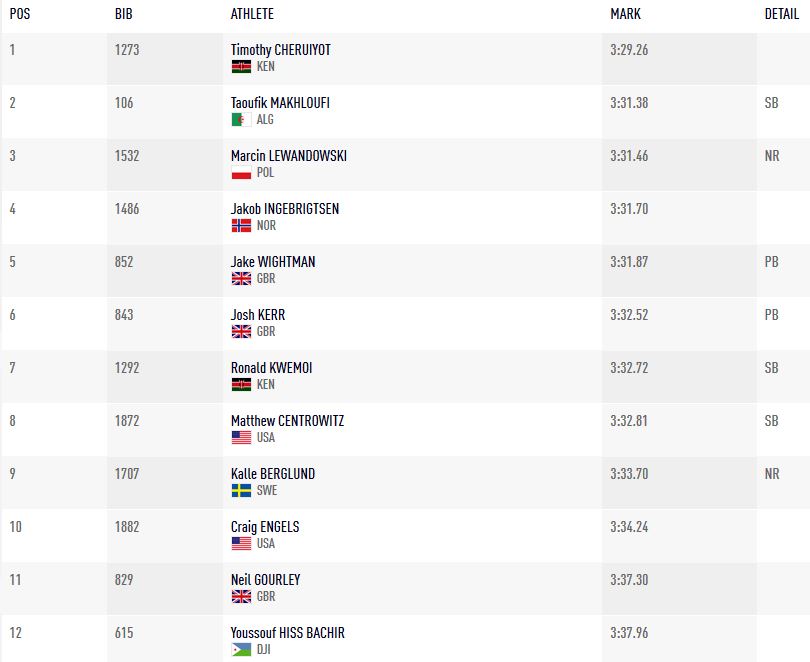