The Last Mile at Balch Fieldhouse 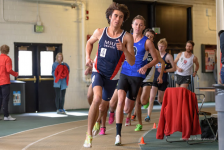 I really felt like hell going into the race and was almost talking myself out of racing as I drove to find parking on the CU campus.

Even though it's not reflected here, I've been writing a fair amount, mostly focused on the Boulder Running Journal I co-edited with Peter N. Jones. We took on that project at the end of last year, just after my race season had concluded which meant some good quality easy run time, taking photos and recharging. Well writing about running often translates into not running as much, as I was overly consumed with pulling contributors together, forming partnerships with photographers and brands, editing photos, and figuring out how and where this was going to get distributed. Overall a great experience and we did the best with what we had for the first issue. Every week since the new year I think it's going to be the week I gain some consistency back.

This week was no different.

Last Saturday I ran the Mile in the last official CU invitational at Balch Fieldhouse. There were a few reality checks going into the race; I hadn't done any workouts, it was my first race ever on a 200m track and it was my first time running in track spikes so I set expectations low, I was there mostly for being part of it all.