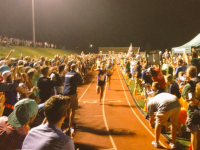 While the meet set plenty of notable stats and records, the goal to bring Raleigh into the track scene also succeeded, as a record crowd was on hand to watch the event.

In just three years, the Sir Walter Miler has exploded onto the national track scene as well as the Raleigh community. What started as one man's quest to break the four-minute Mile has quickly evolved into a cultural experience and a nationally prominent race.

"It could not have gone any better. The numbers proved all the hard work that went into the meet this year," said meet organizer Sandy Roberts. "The athletes had great performances this year. We are thrilled all together with how the meet played out."