Saïd Aouita: The Greatest of All-Time? 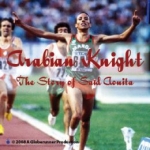 Aouita was not simply a consummate competitor, who won a hard-to-believe 115 out of 119 races in close to a decade... but he was a peerless entertainer. The Olympic champion could talk a race as well as he could run one.

When the Ancient Greeks, who invented the Olympic Games as an afterthought to laying the ground rules of Drama, Philosophy, Ethics, Medicine, Astronomy, et al, wanted to venture a bit of soothsaying as well, they would despatch a slave to Delphi to consult the Oracle. We slaves to track and field athletics have a much simpler task nowadays; we just log on to the internet and consult the likes of trackandfieldnews or letsrun. We can get results, reports, stats, and opinions on the state of the sport from across the world. The latter site has its drawbacks, mostly connected with its forum and message boards, where there are a few, sorry, a lot too many trolls, attention-seekers, and people who just can’t spell.

However, this piece is for the dudes who have been having a lively discussion recently on the merits and demerits of a character who was lighting up the track when I was in the prime of my daily newspaper athletics writing career three decades ago. Excuse the delay of a week or three in joining in, but I was too busy writing about another all-time great, Kenenisa Bekele, as I had similarly done with his illustrious predecessor, Haile Gebrselassie on previous occasions. My daily scribbling stint having also encompassed the careers of Sebastian Coe, Steve Ovett, Steve Cram, Sergei Bubka, Daley Thompson, Carl Lewis, Michael Johnson, Flo-Jo, JJK... I could have meant any of them, and indeed, I could go on and name many more… but most of you will have already guessed from the adjacent photo, the athlete I most enjoyed writing about, and watching in action was Saïd Aouita; which is why I eventually made a television documentary with him.

I’m not going to get into to some of the more arcane areas of the recent forum debate; I just want to say that, since the Moroccan’s career took place between 25 and 35 years ago, younger readers and indeed those who were not regulars on the Grand Prix circuit where he plied his trade will simply not know the levels of excitement he engendered wherever and whenever he competed. Because Aouita was not simply a consummate competitor – who won 115 out of 119 races in close to a decade before injury halted his momentum – but he was a peerless entertainer. Aouita could talk a race as well as he could run one.

I first encountered him in 1983, prior to the inaugural IAAF World Championships in Helsinki. George Gandy, who had been Seb Coe’s advisor at Loughborough University had told me how another of his world class athletes, Graham Williamson had been left in the dust by Aouita in a pre-World Championship event in Italy a few weeks before. Four years previously, Williamson had won the World Student Games 1500 meters, with Aouita finishing last.

The tiny Moroccan had won the following WSG in 1981, and had obviously made even greater strides since then; and with Coe out of the reckoning for Helsinki, and Ovett coming back from injury, the third Great Brit Steve Cram was clearly going to have some serious opposition from Aouita. Since I spoke reasonably good French, and with French being Aouita’s first European language, I went to the Athletes’ Village on the outskirts of Helsinki to track him down. He was very wary, telling me outright that he suspected me of being a ‘spy’ for the Brits. That was typical Aouita. Why believe simple journalistic interest when a conspiracy theory suited his word view better? Then there was his manager, Enrico Dionisi, a character straight out of central casting for volatile Italians. Their press conferences were like comedy routines by Groucho and Chico Marx.