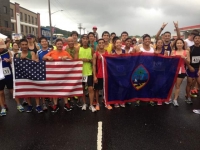 "This race represents just a Mile in the shoes of the people who liberated Guam. It's an honor to run this Mile."

Commemorating an important day in Guam's history, the Liberation Day Mile is a unique opportunity for runners to celebrate with a float's-eye-view before the parade has even begun. Competitors raced along Marine Corps Drive from Anigua to Chamorro Village, while early spectators cheered them on.

The race also represents a unique distance. "It's the only official Mile-long race in Guam," explained race organizer Manny Hechanova. "It's a tough Mile, with heavy smoke from nearby barbecues along the parade route. And it's crucial for runners to warm up, because the race is over so fast."

"My family celebrates along the parade route every year. They were there today cheering me on," said Limtiaco, who attributed his win to his loved ones. "My family motivated me."