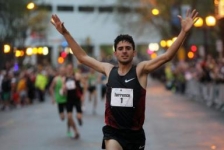 Beginning with Steve Scott’s three victories in 1986, the American presence at the Carlsbad 5000 has always been strong.  But except for Steve the only other American male champ at the World’s Fastest 5K has been Doug Padilla in 1990 (13:29).  This year the possibility of a third American win will be tempered by a cadre of East African whippets beginning with two-time defending champion and Olympic 5000m silver medalist Dejen Gebremeskel of Ethiopia. But, matchmaker Matt Turnbull has lured a trio of top U.S. Milers including Bay Area Track Club standout David Torrence to carry the U.S. colors this Sunday April 7th.

While London Olympic 1500 meter silver medalist Leo Manzano is, understandably, the U.S. headliner, and late entrant Will Leer arrives as the reigning USA indoor Mile and 3000m champion, David Torrence has been training down in Mexico and will hit San Diego’s Lindbergh Field today on his way up to Carlsbad.