Olympic Medalist Nick Willis: How to Run a Faster Mile 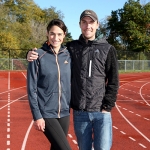 "To run the Mile, we need to run like children, which means getting off your heels and onto your toes."

While a masochistic segment of the running community continues to push the boundaries of human suffering in ultramarathons, another group is returning to the basic Mile to test their mettle. Just about anyone who’s ever run one — in junior high gym class, on the high school track — can rattle off their best time, and a resurgence of Mile road races is inspiring weekend joggers to take another shot at their personal record. In fact, the number of road Mile events across the country shot up from 730 in 2010 to 1,350 in 2015, according to Running USA.

Two-time Olympic medalist Nick Willis happens to be one of the fastest Milers on the planet, with a personal best of 3:49.83. A few years ago, when his wife, Sierra, a recreational runner, was logging long, grueling runs training for a half-marathon, she got jealous watching her husband divide his week between hill repeats, track intervals and long runs. “She asked me, ‘Why is this kind of training reserved for elites?’” Willis says. “So I shaped a training plan for her and her friends, and they fell in love with it.”

In what eventually became a 30-person training group, some runners not only dropped their Mile times by a minute or two, they also lost six or seven pounds. “Training for a Mile is a more holistic approach to running,” says Willis. “It’s like the running version of CrossFit. You don’t get bored and your performance doesn’t plateau like it does when you’re running the same pace mile after mile.”