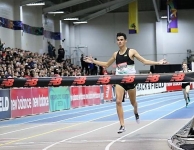 "I haven’t laid my season out exactly yet, but I think it will come. I think I have the potential to run a good amount under it.”

BOULDER — Cruz Culpepper shocked his parents when he ran the Mile in 4 minutes, 13 seconds as a 15-year-old to win a prestigious national high school meet as the youngest competitor. He surprised them again when he ran 4:04 a year later.

Now, Culpepper is turning heads across the country as potentially this country’s next great Miler.

With his newest milestone, the oldest son of Colorado running royalty —  Alan & Shayne Culpepper, both Olympians in 2000 and 2004 — has the fastest-ever indoor Mile for an American 17-year-old.

“I was definitely a little bit disappointed, but I think it’s pretty good because it will leave me hungry for outdoor (season) still,” the Lafayette resident said of falling a tenth of a second short of the 4-minute mark.

Running at the University of Washington, which he will attend next fall, Culpepper knew he had a chance to break 4 minutes on the home stretch and dived at the finish line, only to miss it by the blink of an eye.

“He was willing to throw himself, literally dive across the line to try and break 4 minutes, (but) that really wasn’t the goal all along,” said his father. “It was like, ‘I want to go and run to my fitness (level) and try to keep getting better.’ Which is why, at the end of the day, he wasn’t devastated. It was like, ‘I’ll have other opportunities, and I’ll keep working towards that.’”

Cruz is confident he will go sub-4 in the outdoor season this year, but it will not be for Niwot High School, where he won two 4A state track championships and two state cross country titles. Instead, the senior plans to run in meets around the country against elite competition.

"I haven’t laid my season out exactly yet, but I think it will come,” Culpepper said of the sub-4 Mile quest. “I think I have the potential to run a good amount under it.”

Cruz was 26 months old when his father finished 12th in the marathon at the 2004 Athens Olympics. At the Sydney 2000 Olympics, Alan ran the 10,000 meters. Shayne ran the 1500 at the Sydney Olympics and the 5000 at the Athens Olympics. Alan was with Cruz in early February for a meet on the same track at Washington when he ran 4:01.66. Shayne was there with him Feb 15 when he almost became the 11th U.S. high schooler to crack the 4-minute barrier.

See where the Culpeppers rank as a married couple in the Mile HERE.