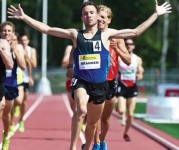 To this day, I still get excited and nervous just thinking about that July night in Halifax.

By Nathan Brannen for CBC Sports

There are few events in the sport of track & field that people understand like the Mile.

Even people who know very little about track, know that it takes an extraordinary effort to break 4minutes over the 1609 meter race. The mystery surrounding this distance is as alive today as it was in 1954 when Roger Bannister first broke the magical 4 minute barrier.

Sixty four years after Bannister, as a naive 18-year-old high school senior, I found myself dreaming of this feat. Only six high school runners in North America had ever broken the 4 minute Mile mark, and it wasn’t that long since pundits finally stopped saying the 4 minute Mile was not humanly possible. But hey, I’m young, and frankly, I don’t know any better. I knew I wanted to give this a go and see if I could become only the 7th high school athlete in North America to dip under 4 minutes.

The race was set. I was going to give it a shot at the Aileen Meagher Track Classic in Halifax on Sunday, July 8, 2001. No athlete had ever broken the 4 minute Mile on Nova Scotian soil, so what better place to try? I woke up to far-from-ideal weather for the record attempt. In true Halifax fashion, it was windy and rainy, great racing conditions … or not. As the day went on, I watched the weather beginning to break and the sun slowly peaking out. Was it going to be possible? Might I get the ideal weather conditions and a good opportunity to break 4 minutes?

I remember walking into the stadium like it was yesterday. I had flown from Ontario to Nova Scotia to race in a big International competition. I was young, excited and ready to compete in front of a large crowd. What I wasn’t expecting was the stadium to be empty and the race organizers still setting up the timing system and getting things underway. I thought to myself, this is exactly the place to break the 4 minute barrier: low key, small crowd, but at the same time, everyone knew what we were trying to accomplish.

Race conditions not ideal
As we approached race time, conditions weren’t perfect, but they were as good as you could expect in Halifax at that time of the year. The race was on. It could be a record setting night, or at least I hoped so. At this point, the only thing I could do was try to relax and get the nerves to settle down. My body knew it was about to go into battle and I would be pushing it harder than I had ever done previously. I knew I was ready, but there were still those questions in the back of my head:  was it possible, was I really ready, and did I train hard enough to do it?  I didn’t want to let everyone down who came to watch me.

The gun goes off and immediately I tuck behind my two pacemakers, Darryl Fillion and Matt Kerr. Darryl has the task of taking us through the first 800 meters in 1:58 and 2:27-2:28 at the 1,000 mark before Matt takes over for the next 200 to get me to bell lap. We go through the first two laps and I hear the meet director yell out “1:56!”I would be lying if I didn’t admit an explicit word popped into my head when I heard how fast we were. The excitement of the night made us go out a little too quickly, and I still had half the race to run.