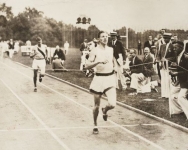 Jack Lovelock’s run at Princeton University shattered the world record for the Mile, held by Frenchman Jules Ladoumègue, by 1.6 seconds. The race was dubbed the ‘greatest Mile of all-time’ by Time magazine.

The race was part of the sixth annual Oxford-Cambridge vs. Princeton-Cornell track meet. There was much media interest in the showdown between Lovelock (Oxford) and Bill Bonthron (Princeton), with speculation that the world record might be broken. Bonthron had won that year’s intercollegiate 800m and 1500m events impressively. As a warm-up for the Princeton-Cornell meet, Lovelock and his teammate Forbes Horan (Cambridge) competed against a Yale-Harvard team in the Mile. Lovelock won this race in 4 minutes 12.6 seconds, an intercollegiate record.

On the day of the event there were about 5,000 spectators at Palmer Stadium, Princeton. Rain threatened but held off, and by the start of the program at 4.30pm conditions were good for running. Bonthron took the lead before giving way to John Hazen (Cornell). To Lovelock’s delight, they set a fast pace. With half a mile to go, Bonthron moved back to the front. At the top corner Horan overtook Bonthron to make sure the ¾-mile mark was reached in the target time. Horan soon dropped back, leaving the race to Bonthron and Lovelock.

With 300 meters to go, Bonthron pulled away. Lovelock was prepared and shortened and quickened his stride, closing the gap before the final bend. As they came into the home straight he drew level and then hit the front. Bonthron was unable to muster his usual ‘blistering kick’ and Lovelock breasted the tape seven strides ahead.

Lovelock’s time of 4 minutes, 7.6 seconds broke the world record by 1.6 seconds! Bonthron was also under the old mark, clocking an American record of 4:08.7. For New Zealand, it was the first time a Kiwi had set a recognized world record. Now the top Miler in the world, Lovelock was inundated with invitations to social engagements and races in Europe and the United States. In 1933 Lovelock ran 33 major races, winning most of them. That year he came second to baseballer Carl Hubbell in the Associated Press Athlete of the Year poll in the USA.

To cap his storied career, Lovelock won the 1500m gold medal at the 1936 Berlin Olympics.

NOTE: Lovelock became a doctor, and in 1947, he and his wife Cynthia & daughter moved to Manhattan, NY. Sadly, on December 28, 1949, Lovelock, at age 39, who had some head injuries, fell beneath a subway train and was killed instantly.

The Kiwi legend has playing fields and sports bars named after him in New Zealand. He has also inspired books, stamps, a stage play and a film. In 2002, a statue was erected at Timaru Boys' High School, where much of the memorabilia related to him is stored.