Lauren Johnson has herself a day 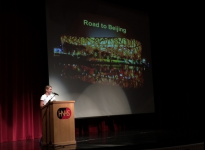 By Aubrey Reichel, The Journal Gazette

Professional runner Lauren (Davenport) Johnson knew she was going to address a crowd in her hometown at Huntington North High School on Thursday evening.

What she didn’t know was that Huntington Mayor Brooks Fetters was to sign a proclamation that today is Lauren Johnson Day in Huntington. She was also given a medal of leadership by the mayor.

“It means a lot to me,” Johnson said of the support. “Being from a small town and having the community supporting me, having family and friends here, some past coaches I haven’t seen in a while came.

“It’s really cool. Maybe wasn’t so up for the public speaking thing, but getting everybody together, getting to see everyone was good.”

The proclamation and gathering was aimed at recognizing Johnson’s recent achievements of advancing to the semifinals of the 1500-meter run at the IAAF Track & Field World Championships in Beijing in late August.

She missed the finals by 0.82 second, finishing in 13th place.

Lauren Johnson Day proclamation from The Journal Gazette on Vimeo.