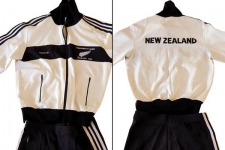 "I’m delighted to donate my warm-up suit to the Heritage Collection. Through its preservation and public display, I hope the suit helps to create interest in running for generations to come.”

The announcement of Walker’s generous donation is tied to the 44th anniversary of his 2000m world record of 4:51.4 set on June 30, 1976 at the Bislett Games in Oslo. Walker’s run, which he has often described as his greatest race, broke Michel Jazy’s mark of 4:56.2 which had stood for a decade.

A month after that 2000m record, Walker became Olympic 1500m champion in Montreal, wearing the all-black kit of New Zealand, famously crossing the finish with his arms aloft in triumph.

First sub-3:50
The previous year, Walker had been unstoppable at the Mile, winning eight sub-4 minute races. Most notably, in Gothenburg, Sweden on August 12, 1975, Walker became the first man to run the Mile in under 3:50. His world record of 3:49.4 took more than one-and-a-half seconds off Filbert Bayi’s mark set three months earlier.

A decade later Walker again created athletics history as the first to run 100 sub-4 minute Mile performances. By the end of his career, aged 40 in 1992, he had a staggering 127 sub-4 Mile times to his credit, his first time under that barrier being achieved on July 7, 1973.

Strength, stubborn resistance and enduring power
Walker was coached by Arch Jelley, who followed the principles of another legendary Kiwi trainer Arthur Lydiard. Jelley instructed Walker for 20 years, with year-round fitness the key to his success. Walker ran 80 miles per week when not racing and 60 miles per week during race season.

The 1986 New Zealand team warm-up suit, which has been so kindly donated by Walker, is adorned with the silver fern, the national symbol since the 1880s. In Maori culture the fern’s fronds stand for strength, stubborn resistance and enduring power. In so many respects it symbolises Walker’s life, his running, his later political career as a Manukau City councillor and his ongoing fight with Parkinson’s disease.

The suit comes from the period when Walker dabbled with the 5000m. Although he finished fifth at the 1986 Commonwealth Games in Edinburgh, it was a distance which he never really enjoyed. At the next edition in Auckland four years later, he was back contesting the 800m and 1500m.

In 1996, Walker was awarded the Olympic Bronze Order. In 2009 Walker was appointed Knight Companion of the New Zealand Order of Merit and became Sir John Walker.

Mile reunion
On November 21, 2019, Walker and his wife Helen were among the distinguished guests at the World Athletics Heritage Mile Night. The event in Monaco celebrated the history of the 1500m and Mile events and gathered many of the events’ all-time greats.

“It was good to meet up with so many old friends at the Heritage Mile event,” confirmed Walker. “Having seen the work being done to record and honor our sport’s history, I’m delighted to donate my warm-up suit to the Heritage Collection. Through its preservation and public display, I hope the suit helps to create interest in running for generations to come.”