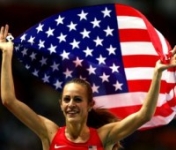 Jenny Simpson won one of three silver medals for the U.S. at the World Track & Field Championships on Thursday in a 1500 meter final where 17-year-old Mary Cain finished a respectable 10th.

The 1500 was the key event for American fans on Thursday’s schedule at Luzhniki Stadium in Moscow. Simpson, 26, came in as the defending world champion. Cain impressed in becoming the youngest woman ever to make the 1500 final at the World Championships.

Sweden’s Abeba Aregawi, who competed for Ethiopia at the 2012 Olympics, entered as the favorite and won in 4 minutes, 2.67 seconds. Simpson led for most of the race until Aregawi passed her with about 300 meters left. The Colorado native held on for silver in 4:02.99. Kenyan Hellen Obiri earned bronze in 4:03.86.

“We can do another round,” Simpson told NBC Sports reporter Lewis Johnson on Universal Sports. “I’m ready for a fourth round. … I was so tired at the end because I led so much of it. I tried so hard to catch Aregawi. … That’s the hardest I’ve ever run (trying to catch her) in my life.”

Cain completed an impressive season that saw her become the youngest woman to make the U.S. team at a World Championships. In the final, she was in last place going into the final lap and looked to be losing ground on the pack. But she summoned energy to finish 10th out of 12 in 4:07.19, the third fastest time of her life.

“They (my coaches) said there was no pressure, but I think I could have medaled,” said Cain, who watched the 2012 baseball drama “Trouble with the Curve” before her race, according to Universal Sports. “I’m definitely a little upset, but I’ve got to rally, get out of this funk.”

Cain said it was her last race of the season. She will head back to Bronxville (N.Y.) High School to begin her senior year.

“I think I’ve matured on the world scene,” she said. “It makes me a lot more motivated to be here two years from now.”