In his brother’s footsteps 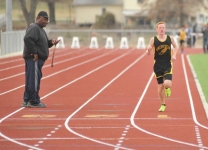 Many things motivate Smithton distance runner Isaac Calvert from his faith in God to his mother.

He is also motivated by following in the footsteps of another Smithton distance runner, his brother.

“I always want to do as well as my brother did when he was in high school,” he said.

“It’s always good as an older brother to hear that you are motivation for your younger brother,” Benjamin said.

Isaac hopes to reach his brother’s times between now and the state meet.

“If he breaks it, he breaks it, that’s the way it is,” Benjamin said. “If anybody does it, I’d like it to be him to keep it in the family.”