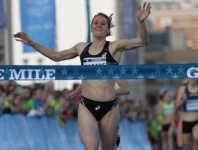 Grand Blue Mile race officials today unveiled a prestigious field of invitational championship participants, setting the stage for unquestionably the event’s most anticipated  running. In addition to the more than 4,500 runners expected to hit the streets on Tuesday, April 21, track & field Olympians and World Champions are scheduled to compete for $30,000 in prize money as part of the men’s and women’s invitational championships.

“To say we’re pleased with the quality of athletes we have committed to race in the 2015 Grand Blue Mile is an understatement,” said Chris Verlengia, Wellmark corporate sponsorship manager. “Perhaps more than ever, this year’s event is not to be missed for even the most casual fan — it’s truly a dream field by all estimations.”

Although the Grand Blue Mile and Drake Relays have a strong tradition of attracting top talent despite occurring early in the season, Verlengia recognizes the significance of hosting such esteemed competition a full four months in advance of the 2015 IAAF World Championships in Beijing, China.

“In many ways, the Grand Blue Mile has the privilege of providing a preview of what’s to come later in the season as World Championship teams are determined,” said Verlengia. “If being named among the top-3 Mile races in the nation by Shape magazine wasn’t enough validation, this certainly puts the event on the map as a testament to the quality of sports entertainment and hospitality in the Midwest.”

Those anxious to catch a glimpse of an Olympian won’t have to wait long. Manzano will host a Grand Blue Mile community training run — open to runners of all abilities — and meet and greet scheduled for 11:30am on Monday, April 20. This casual run starts and ends at 13th Street and Grand Avenue. Those planning to participate should arrive by 11:15am for brief instructions. No registration is required.

Not to be overshadowed, defending USA 1 Mile Road champion and 2014 World Indoor Championships finalist Heather Kampf will return to the Grand Blue Mile — her fifth consecutive appearance — in an attempt to join Sara Hall as the event’s only two-time invitational champions. The Minnesota native and perennial crowd favorite will attempt to best her course record of 4:32.62, set in 2014.

Registration for the Grand Blue Mile is open and costs $15 for youth (ages 17 and under) and $25 for adults. Event proceeds support Iowa Kidstrong school fitness programs and the Drake Relays. Visit www.grandbluemile.com to register for the race, view the course map, find training tips and get spectator information.