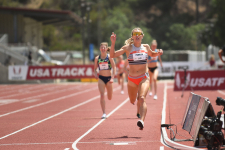 In the world of track & field, Elinor Purrier is known as the runner who was raised on a farm. She's hoping that she'll soon be known as an Olympian.

Purrier — who goes by Elle (pronounced "Ellie") — has received so much attention for her upbringing on her family's dairy farm that she cheekily acknowledges it on her Instagram profile, which confirms, "Yes, I grew up on a dairy farm in VT" to her 45,000-plus followers at @elleruns_4_her_life.

The American indoor record holder in the Mile and 2 Mile, who is hoping to qualify for her first Olympic team at the upcoming U.S. Olympic Team Trials — Track & Field in Eugene, Oregon, admits that she wasn't always a fan of the curiosity.

Recently, though, she's embraced the interest in this part of her life.

"Now I'm realizing how few farmers there are in the world, and I'm so proud to represent this industry and to try educate people on what happens around the farm," she says. "Because I do think there's a huge disconnect between the producers and the consumers. It's pretty sad to me. But I'm really passionate about dairy farming and I'm so fortunate to have grown up the way I did."

She is proud to use her growing fame to clear up misconceptions about the conditions that farm animals experience.

"The high opinions [some people have] about how cows are treated is frustrating to me because these people probably don't even know that female cows are the ones that produce milk," she says with a laugh. "All the famers that I know treat their cows really well. That makes sense for so many reasons, both ethically and if you treat your cows badly, then they're not going to produce a lot of milk."

She certainly has first-hand experience on this subject — literally. Growing up just a few miles from the Canadian border in Montgomery, Vermont, Purrier would rise before dawn to milk cows and help with chores on a dairy farm that's been in her family for more than a century.

That work ethic helped prepare for her a steady rise to the top of the American distance running ranks. Purrier ran cross country and track and played basketball in high school, then started attracting national attention at the University of New Hampshire as a steeplechase. She earned All-American status three times in the event, a 3000 meter race that includes barriers and water jumps. But when focused on flat races she really made a splash. Purrier won the NCAA indoor title in the Mile as a senior in 2018 and then represented the U.S. at the 2019 World Athletics Championships in the 5000 meters in her first full season as a professional.

She really announced herself in February 2020 when she broke the U.S. indoor Mile record while victorious against a world class field at the Millrose Games in New York City. Her time of 4 minutes, 16.85 seconds took nearly four seconds off the previous U.S. indoor record, set by Mary Decker (Slaney) all the way back in 1982 (and came within a whisker of Slaney's outdoor record 4:16.71, set in 1985). A stunned Purrier admitted that she had no idea what Slaney's American record was until told after the race.

But one thing she did know was that with the Olympic Games Tokyo 2020 just a few months down the road, she had become a serious contender to make Team USA and challenge for the podium. Or so she thought.