Four of Them Made History 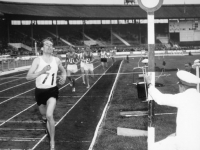 "It was a fabulous race, a pleasure to run in. I shall dream about it for years."

The six straining runners at the top of this page (there are really seven) are Mike Blagrove, an Englishman; Stanislav Jungwirth, a Czech; Derek Ibbotson, English; Ron Delany, Irish; (Stefan Lewandowski, a Pole, is hidden behind Delany); Alan Gordon and Ken Wood, both English. Four of them, Ibbotson, Delany, Jungwirth and Wood, made track history at White City, London last week on July 19 in this one race by running the Mile in under 4 minutes: the first time so many had run so fast. Ibbotson, in winning, set a new world record of 3:57.2, almost a second faster than John Landy's 1954 mark. The quartet increased to 15 the membership of the exclusive Sub-4 Club.

A few hours before, Ibbotson, 25, an electrical engineer from Huddersfield, Yorkshire, had stepped off a train from the north of England. He went to a hotel to get some sleep, warning his friends: "It's going to be very interesting tonight. I think the time will be 3:50-something."

It was the first day of a two-day international track & field meet between London and New York, but the international invitation Mile race was a strong co-feature which completely overshadowed the intercity contest.

As the big stadium clock showed around 8:00pm, the runners in the invitation Mile came up to the line. Athletes on the green center field stopped warming up. Everybody tensed, and then the field was off.

"It's fantastic," gulped a spectator, as chunky Mike Blagrove led the pack in what looked like a sprint to an astonishing first-quarter time of 55.3 seconds.

"When I heard the time at the quarter-mile," said Ibbotson later, "I felt sick, but I was all right by the half-mile." And there they whipped past the post in 1:55.8; Blagrove still first, then Jungwirth, Ibbotson, Delany, Wood, Lewandowski, Gordon. Entering the backstretch on the third lap, Blagrove had to drop behind and finally out of the race altogether. He had done his part. At Ibbotson's request he had run a searing first two laps.

Jungwirth, renowned for his pace setting, reluctantly took over and, at the end of the third lap, the time was exactly three minutes. Ominously the bell clanged for the runners.

SHIFTING INTO HIGH
Ibbotson was so confident that almost at the very beginning of the backstretch he seemed to change gear. He caught Jungwirth and then sped round the last bend. Delany, badly positioned, had come rushing up with his expected finishing burst, but at the tape he was second, about 10 yards behind Ibbotson.

The first four runners crossed the finish line under the coveted 4 minute mark, for the first time ever (it was at the White City in 1955 that Laszlo Tabori, Chris Chataway and Brian Hewson had all beaten 4 minutes in the same race).

Derek Ibbotson seemed far from exhaustion. Triumphantly, his arms held high, he ran a lap of honor before the delirious crowd. He drank a pint of milk and then came off the center field. "I wanted a fast time because the only way to beat Delany is to run fast, since he's a fast finisher," he said.