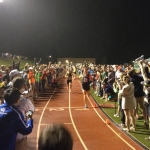 Palmer, 23, who was recently featured on ESPN.com for his quick rise in the sport, and near misses (including a 4:00.00), executed a flawless race and took a commanding lead with 200 meters to go to cross the line in the Capital RunWalk Men's Sub-4 Challenge in 3:57.61. It was the second fastest time in North Carolina history to Ken Popejoy’s hand-timed 3:57.3 at the MLK games in Durham on May 12, 1973. Also joining Palmer under 4 minutes were Winston-Salem, NC’s Donnie Cowart (3:58.43) and Asheville, NC’s Isaac Presson (3:59.77). It was also the first time under 4 for Cowart and the second for Presson. All three were adorned with American flags at the finish.

In the Capital RunWalk Women's Sub-4.5 Challenge, Furman Elite’s Heidi Gregson followed her teammate, Stephanie Garcia, for three laps and then ran the last lap well clear of the field to finish in 4:34.05, the fastest women's time in North Carolina history. Garcia, who holds the second fastest womens 3000 meter steeplechase (9:24.28) in the United States this year, served as the pacer. In a battle for second down the homestretch, Austin, TX’s Kristen Findley (4:42.45) narrowly held off former Duke star, Cydney Ross (4:42.78), to round out the podium.

The event also included the Great Outdoor Provision Co. “Raleigh’s Finest Mile,” which was a group of local celebrities, running store employees, running group representatives, who started the night off in a staggered race, according to predicted Mile times.

The Sir Walter Miler was promoted by Sir Walter Running; a local group that consists of Pat Price, Logan Roberts, and Sandy Roberts. The event expanded after the success of last years “Sandman Mile,” a quest for the sub-4 minute Mile in which Logan paced Sandy for two laps and then Sandy ran the last two solo. Sandy Roberts also completed the fastest road Mile in North Carolina history July 4th during the Raleigh Downhill Mile (3:51.42).

The debut Mile race was also a Bring Back the Mile Featured Event, showcasing the best Miles across the country and throughout the year.

The Sir Walter Miler is expected to return in 2015. The event also included a pre- and post-race party at Raleigh Brewing Company. The party was highlighted by three food trucks, live music and the “Sub-4 ABV Challenge,” where six local breweries delivered a keg of their best low alcohol beer. On Thursday night, the Busy Bee Cafe hosted a pre-race dinner for the athletes, and Kickstarter supporters. The group successfully raised $3502 during the Kickstarter campaign, all of which went to prize money for the athletes. The event concluded on Saturday morning with a “Run with the Pros” event at Umstead Park. Reebok’s Bobby Mack led the run. Bagels and coffee were provided by Elliptigo, who offered free demos of their unique product afterwards.

For more information, contact Pat Price at sirwalterrunning@gmail.com or (919) 260-8013