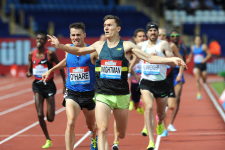 LONDON - World indoor 1500m record holder Samuel Tefera is among the headliners announced for the Emsley Carr Mile at the Müller Anniversary Games, the 10th stop of the 2019 IAAF Diamond League, on July 20-21. The 67th Emsley Carr Mile will be contested on Sunday, July 21.

While the Mile is not a scoring event for Diamond League points purposes this year, the race will continue its strong tradition. Founded in 1953, the Emsley Carr Mile is one of the most famous races in the history of British athletics with some of the world’s leading runners claiming the title including IAAF President Sebastian Coe, his British compatriot Steve Ovett, Ethiopian running legend Haile Gebrselassie, Bernard Lagat of the USA and Morocco's Hicham El Guerrouj who has held the Mile world record of 3:43.13 since July 7, 1999, nearly two decades ago.

The iconic race, which was inaugurated in 1953 in the memory of former News of the World editor Sir Emsley Carr, was last won by a British athlete in 2017 when Wightman claimed the title with a 3:54.92 clocking. Wightman, 24, won both European and Commonwealth 1500m bronze last year.

"I was buzzing to win the event in 2017 and it had real significance in my confidence and development the following year," Wightman said. "On top of that, I know from experience that the support I will receive at the London Stadium is like nothing else, so I’m sure it make all the difference as I take on a world class field."