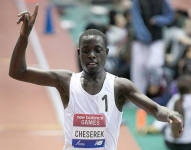 It’s been two years since Edward Cheserek raced at The Armory, and as much of a high school sensation as he was then, he’s even bigger now.

Cheserek became the dominant high school cross country and distance running athlete in the country during his three-year stay at St. Benedict’s Prep in Newark, N.J. after moving from his native Kenya.

Now at the University of Oregon, “King Ches” has taken college distance running by storm. He is already a two-time NCAA cross country champion and has three track titles under his belt – and he’s still getting started.

Even in the context of Oregon’s rich heritage of distance running – from Bill Bowerman and Phil Knight and the birth of Nike to athletes such as Steve Prefontaine, Alberto Salazar and Galen Rupp – Cheserek’s growing list of accomplishments stand apart.

“I love seeing anyone at Oregon do well,” said Galen Rupp, who won six NCAA distance titles in 2008-09. “Edward handles it with class. I’ve met him several times. Oregon is lucky to have a guy like that.”

Rupp and Cheserek are among 15 current or former Oregon Ducks who are on the starting lists for the NYRR Millrose Games on Saturday, Feb. 14.