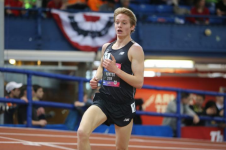 “Alan Webb is the first guy I looked up to as a runner. To know he was the first one to break four (indoors) -- and I hope to do it this year -- is special.”

Drew Hunter, of Purcellville, Va., has his sights set on becoming the second high school boy to break the 4-minute mark in the Mile indoors, and his first opportunity of year will come at the Armory Track Invitational at the New Balance Track and Field Center at the Armory, Feb. 5-6.

Hunter, a senior at Loudoun Valley High School, will compete unattached in an Open field and attempt to join another Virginian, Alan Webb, on an exclusive list. That race will be part of Day 2 Saturday afternoon Feb. 6.