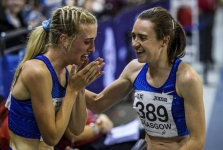 Tokyo Olympic hopefuls train "really well together and motivate each other."

Laura Muir says becoming housemates with Jemma Reekie during lockdown has benefited them both - despite losing to her training partner in Italy.

Reekie, 22, edged out Muir over 800 meters on last Sunday having already done so in setting a British best in February.

Both are coached by Andy Young and Reekie moving into Muir's Glasgow home has allowed them to train side-by-side.

"We knew we'd train really well together and motivate each other," European 1500m champion Muir said.

"It was quite natural because we are away on training camps a lot together anyway. That's why she moved in. I hope that means we can race well over these next couple of months."

The goal for the temporary housemates is next summer's Tokyo Olympics, which have been rescheduled from this summer because of the coronavirus pandemic.

Muir, who finished seventh in the 1500m final at Rio 2016, came fifth at the World Championships in Doha in October after battling injury and illness in the build-up.

Asked if she could win a medal in Tokyo, the 27-year-old said: "I hope so. I was fifth with a really disrupted build-up to the World Championships last year, so all going well, if I am 100% going into the Olympics then I'd love to get on the podium - that's the target."