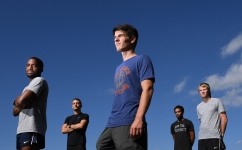 “I want it to be a grassroot program that people feel this is their home and that this is important.” - Matt Centrowitz

There were no shoe sponsorships or endorsement deals waiting for Sam Penzenstadler as he wrapped up his stellar but under-the-radar collegiate running career in the spring of 2015.

A three-time all-American at Loyola University in Chicago, Penzenstadler figured he would remain in the Midwest to train for a year with his college coaches or by himself as he contemplated his running future. Professional running felt like a far-away dream, and Penzenstadler was unable to find an elite post-collegiate club in the area to foster his aspirations.

“I was 99 percent sure that I was staying in Chicago,” Penzenstadler said.

But more than 700 miles away in Washington, D.C., American University graduate student Tom Brumlik, long-time track coach Drew Mearns and two-time Olympian Matt Centrowitz, the Eagles’ cross country and track & field coach, were in the process of establishing the District Track Club. Officially launched in January, the professional post-collegiate middle-distance and distance running club is aiming to be the first of its kind in the nation’s capital since the Reebok Enclave folded in the early 2000s.

Penzenstalder was at the top of their recruiting list.