Asbel Kiprop: Standing out by a Mile 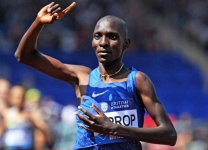 “It would have been even better if I had won the Olympics live on track so I am still chasing the dream – winning the Olympics on the track. That is what I am longing for.”

Asbel Kiprop has been the dominant 1500m / Mile runner on the world stage in recent years. He won the world title in 2011, 2013 and 2015 to add to his 2008 Olympic gold but in the Rio Olympics he could only finish sixth in the metric Mile.

He grew up in a village near Eldoret. His father, David, ran for Kenya in the 1987 All Africa Games in the 1500m and later ran marathons.

Like most Kenyans, he began running at school. He says: “In fact running has always been a part of my life. I have had many years of running since I was 13-years-old.”

His breakthrough came in 2007 when he won the gold in the 1500m at the All-Africa Games and Junior gold at the World Cross Country Championships and finished fourth in the IAAF World Championships in Osaka. He saw fourth as a success, explaining: “I wasn’t disappointed at all because it was the first year of my career and I managed to reach the final in the World Championships and to race against the greats like Bernard Lagat, Rashid Ramzi and those guys I used to watch on TV. It was an achievement for me to line up with them – fourth was very promising.”

In his first Olympics the following year, aged just 19, he finished second behind Ramzi of Bahrain. However, when Ramzi was disqualified following a positive test for a banned substance, Kiprop took the gold medal and it was a bittersweet moment.