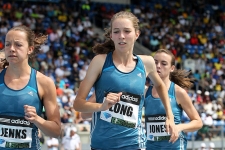 Also featured in what is arguably the deepest field in the six-year history of the race is Anna Rohrer (Mishawaka, IN), the two-time Foot Locker Cross Country Champion and 5000 meter high school National record holder.

The field will join headliners Usain Bolt, David Rudisha, Blanka Vlašić, Jenn Suhr, and Ajeé Wilson at the 11th adidas Grand Prix on Saturday. Backstretch and new standing-room tickets for the event are still available at www.adidasgrandprix.com or by calling 1-877-849-8722.

They will be challenged by:

Danielle Jones (Phoenix, AZ), who recorded the #2 U.S. Mile time of the season (4:39.88) in her exciting runner-up finish to Frazier in the Prefontaine Classic high school Mile

The seventh stop on the international IAAF Diamond League circuit, the adidas Grand Prix is in its 11th year at Icahn Stadium on Randall’s Island, in conjunction with the Randall’s Island Park Alliance. The latest news, photos and information on the event can be found at www.adidasgrandprix.com and here on Facebook and Twitter, @adidasgrandprix, #AGPNYC.