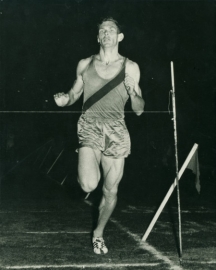 In 1971, Snell moved to the United States, earning degrees in human performance and exercise physiology, and in 2000, the legend was voted New Zealand’s athlete of the century.

In 2009, he accepted redesignation as a Knight Companion of the New Zealand Order of Merit (Sir Peter Snell).

FUN FACT: A statue in his honor stands at Cooks Gardens, Wanganui, near his birthplace of Opunake, site of his 1962 Mile WR.

“We were helpless. My chief memory down the final straight is of Peter’s huge legs ripping great chunks of cinders out of the track with his powerful stride.”

By Len Johnson for World Athletics

‘The greatest athlete NZ has had’: Famed Olympian Sir Peter Snell has died

"We want to reinstate the One Mile Championship name and make this event an annual sanctioned fixture at Cooks Gardens."

The athletics fraternity will finally get to celebrate Whanganui, Sir Peter Snell, Cooks Gardens and what all three bring to the global...

Peter Snell: Titan of the track

“My mental approach was not focusing on the individuals I couldn’t control, but focus on myself. It normally worked out all right.”

Last year was a record-breaking one in sport for New Zealand. The island nation, renowned for its haka-dancing rugby team,...

Sir Peter Snell has been honoured by the United States Sports Academy with a Distinguished Service Award...

The Legacy of New Zealand’s Milers

In an age when track & field was more popular in the U.S. than the NBA, NHL and what is now NASCAR, no one was a bigger star than high schooler Ryun

“The first half Mile was, I felt, too fast, but I was carried along by the whole atmosphere and excitement... I struggled along to the three-quarter mark, and from then on I was hanging on desperately.”

Like October, which also has few top racing opportunities, the...

BARCELONA, Spain – New Zealand’s three-time Olympic middle-distance champion Peter Snell and Kip Keino, Kenya’s 1968 and 1972 Olympic 1500m and 3000m Steeplechase champion, respectively, appeared at the press point at the IAAF Centenary Gala in Barcelona. These were some of the highlights.

Peter Snell to be inducted into the IAAF Hall of Fame

MONTE-CARLO - New Zealand’s three-time Olympic champion and multiple World record breaker Peter Snell is the latest athletics legend to be named as one of the 24 inaugural Members of the IAAF Hall of Fame which has been created to mark the year of the IAAF Centenary.

By Jim Ferstle for Running Times

Peter Snell: Run of a lifetime 50 years on

"The crowd started singing 'For he's a jolly good fellow' and the place was in chaos, with people running all over the show."

For Sir Murray Halberg, it was a night tinged with death and sadness. For Peter Snell, it was the moment he realized he wasn't...

There were other very nice moments such as when I was trying to run a sub-4 minute Mile and ended up breaking the World Record!

Never join someone who eclipses you. Align yourself with one who increases your luster. The man who puts you in the shade...

With tactical cunning and a brilliant burst of speed, 18-year-old Jim Ryun beat the great Peter Snell in a U.S. record 3:55.3 Mile

In San Diego one day last week an 18-year-old boy and a former football linebacker sat down to map out the strategy the boy...

Although he was, in his own words, 'desperate and struggling,' New Zealand's three-gold-medal Olympian beat his own mark and completely routed the world's second and third best Milers

"The first half Mile was, I felt, too fast," said Peter Snell, "but I was carried along...

In the stretch of the Olympic 800 meter finals in Rome last year the highly...

A ‘Novice Miler’ Runs the Fastest Mile Ever

New Zealand's burly Peter Snell, starting in one of the few Mile races of his young career, took the lead with 340 yards to go, sprinted away from the field to better Herb Elliott's classic mark by a tenth of a second: "I think I can improve on the Mile time a little."