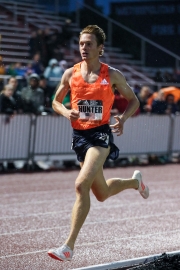 On February 6, 2016 at the Armory Track Invitational Hunter became the second prep to run a sub-4 minute Mile indoors, breaking Mile legend Alan Webb’s previous record of 3:59.86 with a 3:58.25 performance. Two weeks later at the famed Millrose Games, Hunter ran another sub-4, 3:57.81 (4th overall and U.S. HS indoor record), to become the first U.S. high school boy with two sub-4s indoors. In late May, Drew also recorded a sub-4 outdoors at the Prefontaine Classic's Bowerman Mile, 3:58.86, his third of the year, only legend Jim Ryun, with 5 sub-4s, has more by a U.S. HSer in the same year.

At Loudoun Valley High School, Hunter also had several other accolades under his belt, including a Foot Locker Cross Country Championship and Penn Relays titles as well as several Virginia state titles. Drew had committed to run at the University of Oregon, but signed a professional contract with adidas in July 2016, and in August at the Sir Walter Miler, his first race as a pro, he recorded his Mile PR of 3:57.15.

In his professional indoor debut at the New Balance Games on January 21, 2017, teen phenom Hunter won the Mile, breaking the beam in 3:58.92.

FUN FACT I: Running is in Hunter’s blood. His parents: Marc Hunter was a two-time USA World Cross Country team member while Joan was a state champion in Virginia. In 1999 Hunter’s parents coached Alan Webb who later became the American record holder at the distance, the fourth prep runner to break 4 minutes in the Mile outdoors and at that time the only prep to run sub-4 indoors.

FUN FACT II: Hunter is one of 9 children, five of whom were adopted from Haiti and China.

Drew Hunter Returning to The Armory, Site of His High School Sub-4 Record

Now a professional, Hunter to give insights of his great feats to high school student-athletes at The Armory Indoor Track & Field Camp

NEW YORK, N.Y. – Drew Hunter’s return to The Armory on Saturday, November 16 will be especially gratifying for two reasons.

BOSTON – The Boston Athletic Association (B.A.A.) has announced a field of world class competitors for the B.A.A. Invitational Mile, to be held on Saturday morning, April...

“I knew 3:36 was fast and obviously really good for my age. …It shows I’m off to a good start…and it’s a good club to be in for sure. It’s exciting to know I’m on the right path.”

This was hardly the life Drew Hunter envisioned for himself when he was...

Eat Like an Elite: Drew Hunter and 10 Others in His Immediate Family

“He’s fairly capable already, but the practice will be good for him. Hopefully he will leave home able to prepare a variety of healthy meals for himself.” - Joan Hunter

Joan Hunter has a lot of mouths to feed—11 of them at times. That tally includes her...

Generation Next: Influential and Inspiring Runners Under 30

“It might be one of the hardest decisions I’ll have to make. I mean, the University of Oregon is the best program in the country. Turning that down is not easy.”

For four years in an illustrious high school career, Drew Hunter was used to...

"The most important thing is not rushing anything and I’m grateful that adidas understands that process for me to grow as an athlete.”

Back to full-tilt training, the #8 sub-4 U.S. HSer and Oregon bound athlete is feeling great and has gotten green lights from his doctors.

Where is Drew Hunter? The drumbeat is starting to sound on the Internet about the nation’s top prep distance...

The latest HSer sub-4 does credit Maton and Fisher for lighting a fire: “It was really inspiring. After I saw that, I thought ‘OK. I’ve got one goal for next year and hopefully I can join the club.'”

Drew Hunter broke his national high school indoor Mile record at the Millrose Games on Saturday in an event that proved to be as much a...

“I think it’s something that’s not ironic but unique and special. I think everything happens for a reason. I think this is the beginning.”

As a freshman at South Lakes High School in Reston, Va., Alan Webb was a swimmer who thrived in running despite...

"It was so loud the last lap that I just, kind of adrenaline kicked in." - Drew Hunter, 8th U.S. high school boy to break 4 minutes, now third fastest all-time behind legends Alan Webb and Jim Ryun

“Alan Webb is the first guy I looked up to as a runner. To know he was the first one to break four (indoors) -- and I hope to do it this year -- is special.”

Drew Hunter, of Purcellville, Va., has his sights set on becoming the second high school boy to break the 4-minute...

Foot Locker XC champion to compete as Open runner at professional races this winter: “I think I can run 4-flat right now.”

"I want to be a part of special and there's no program out there that has the richness of tradition. All the names of the school record holders... it's incredible.”

By Andrew Nemec, The Oregonian

In the coming year he might even become the 8th U.S. high schooler to break 4 minutes in the Mile. Or the first boy from Northern Virginia to win the Foot Locker Cross Country Championship.

Andrew Hunter didn't run in middle school, but the senior at Loudon Valley High School in Purcellville, Virginia, had plenty of background...

“That’s the goal of any high school runner — to go under 4 minutes.”

A year after winning the 3000 meter race, Hunter wins the Mile in 4:07.15 seconds to become only the second boy to do so after Matthew Centrowitz.

Loudoun Valley junior Andrew Hunter could have attempted to defend the 3000 meter title he won a year ago. But...