NEW YORK — The 2017 New Balance 5th Avenue Mile, stretching 20 blocks down Manhattan’s most famous thoroughfare on Sunday, September 10, will draw a professional athlete field from 11 countries that includes four medalists and 17 finalists from August’s IAAF World Championships, as well as both of the event’s defending champions.

The day begins at 8:00am ET and is expected to draw 6,000 runners across 23 total heats – from youth and seniors to New Balance and FDNY / NYPD heats – with the professional athlete races rounding out the day at 1:30pm ET. In partnership with New York Road Runners and USA Track & Field, NBC Sports Group will broadcast the 2017 New Balance 5th Avenue Mile live on NBC at 1:30pm ET.

Coburn, 26, of Boulder, CO, will be racing the New Balance 5th Avenue Mile for the second time after lowering her American record and setting a new World Championships record in the steeplechase in London earlier this month. With her first career world title, the Team New Balance athlete became the first American woman ever to medal in a 3000 meter steeplechase at the IAAF World Championships. Coburn won bronze in the steeplechase at the Rio 2016 Olympics and is also a six-time national champion in the event.

Frerichs, 24, of Portland, OR, won a silver medal in the women’s steeplechase at the IAAF World Championships earlier this month after finishing 11th in the event at the Rio 2016 Olympics. While at the University of New Mexico, she finished her career with four of the top 10 steeplechase times in NCAA history, including a collegiate record of 9:24.41, which won her the 2016 NCAA national title.

Simpson, 31, also of Boulder, CO, is seeking her record sixth title on 5th Avenue after taking silver over 1500 meters at the IAAF World Championships. The Team New Balance athlete became the first 5-time winner in the history of the 5th Avenue Mile last year. Simpson has earned three IAAF World Championship medals in the metric Mile, beginning with a gold at the 2011 World Championships. She followed that with a silver in 2013 and another earlier this month. In 2016, she took bronze in the 1500 meters at the Rio Olympics, making her the first American woman in history to reach the podium in that event. She set a new lifetime track best in the Mile on July 9 of this year, running 4:19.98 at the London Diamond League meet.

Ingebrigtsen, 24, of Norway, won a bronze medal in the 1500 meters at this month’s IAAF World Championships, a year after taking the 2016 European title in the distance. In May, he set a new personal-best in the Mile, racing a 3:53.23 for eighth place in the Bowerman Mile at the Prefontaine Classic in Eugene, OR.

Jenkins, 25, of Portland, OR, had his breakout moment at the 2016 New Balance 5th Avenue Mile, narrowly defeating Rio Olympic champion Matthew Centrowitz by one-tenth of a second in a blistering time of 3:49.5, which was the fastest-ever performance by an American at the event. In February, he won his first NYRR Millrose Games Wanamaker Mile, and in June he made his first-ever World Championship team after securing a second-place finish over 5000 meters at the USATF Outdoor Championships.

The 37th running of the world’s most iconic road race will be aired live on NBC at 1:30pm ET and streamed via authentication on NBCSports.com and the NBC Sports App, as well as with a subscription to NBC Sports Gold’s “Track and Field Pass,” which live streams to desktops, tablets, mobile and connected devices. Content will be presented as part of the Olympic Channel: Home of Team USA partnership among NBCUniversal, the IOC, and the USOC. The broadcast will feature live coverage of the men’s and women’s professional athlete races, in addition to a recap of the rest of the day’s heats.

New for 2017 is the New Balance 5th Avenue Mile Borough Battle, which will bring together teams of 20 runners from each of New York City’s five boroughs in a race to prove which borough is the fastest.

Expected professional fields with Mile / 1500 PRs below, and for more information, go to: NYRR.org 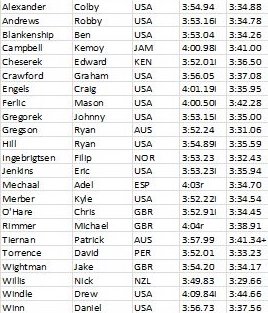 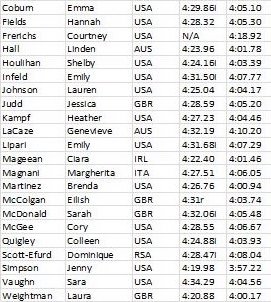