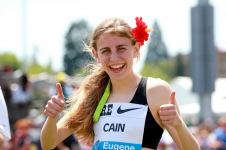 A quick look at the record-setting teen phenom’s career highlights.

Not since Alan Webb was a high school Miler has a teen runner garnered as much attention as Mary Cain.

Her subsequent improvement curve was steep. She set several high school and/or junior records, and won an open national title and a junior world championship. Cain was an undeniable feel-good story for the sport; even the mainstream media, including the New York Times Magazine, covered her.