Where Have All Our Milers Gone? 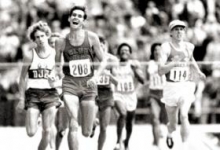 To early burnout as a result of the U.S. system, says the author, and ''the lack of long-term coaching relationships is really hurtful." - Peter Snell

Here's a mystifying bit of track lore you could probably massage into a killer bet in one of those sushi-Perrier-couscous-espresso bars in midtown Manhattan, especially in the wake of Jose-Luis Gonzalez's victory in the Mercedes Mile, formerly the Fifth Avenue Mile, last Saturday. Simply demand to be told when an American male last won that most glamorous of races, the Olympic 1500 meters, the metric Mile. Then sit and wait, while people hunker down into their mashed yeast.

Of course Ryun was as good as they come. He just had terrible racing luck, hitting his prime in 1968, when the Olympics were at Mexico City's 7,349-foot altitude. Kenya's Kip Keino (whom Ryun had beaten in his world record 1500 in Los Angeles the year before), taking full advantage of having grown up in such thin air, led at a searing pace and put Ryun soundly in second.

In 1972, in Munich, Ryun was tripped in his heat, fell, lay stunned too long and never got his chance for revenge. Aside from Ryun and Marty Liquori, who was top-ranked in 1969 and '71 but was hurt in Olympic years, and Steve Scott, whose 3:47.69 in 1982 was then the second fastest ever, but who gets overlooked because he, too, came up short in the Olympics, we have not even had any gallant losers lately.

Look at the list of Olympic 1500 champions and world record holders and you find a host of guys from small countries. Twelve men have held the Mile record since Britain's Bannister first broke 4 minutes in 1954: two Australians, two New Zealanders, a Frenchman, a Tanzanian, an American (Ryun) and a remarkable five Britons.

The Olympic 1500 since 1948 has gone to two New Zealanders (Peter Snell and John Walker) and runners from Sweden, Luxembourg, Ireland, Australia, Kenya, Finland and Great Britain (Sebastian Coe, who won the last two). The only great nation worse than the U.S. in developing Milers is the Soviet Union.