Uceny Moving on After Olympic Disappointment 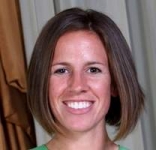 By Brett Hess, The News-Sentinel

Morgan Uceny has picked herself up and dusted herself off. But the Indiana native returned to her hometown of Plymouth this weekend and is still unable to erase the memory of her fall and DNF in the 1500 meter Olympic finals on August 10.

The former IHSAA champion, Cornell University All-American, and United States champion was the top-ranked 1500 meter runner in the world in 2011. She sat down with on Sunday and talked about the Olympics, the status of U.S. track and field, and where the 26-year-old goes from here.