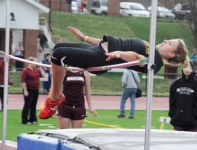 If you build it, they will come.

That’s the logic being put toward the inaugural Tri-Cities Track Classic, which will be held April 19-20 at Science Hill High School’s Kermit Tipton Stadium.

The massive stadium features a nine-lane oval track that rivals most collegiate facilities, and meet organizers plan to utilize Science Hill’s facilities to host high school athletes from more than eight states during the two-day event...

The Mile run will be named after Ray Flynn, an Olympian and East Tennessee State University graduate.