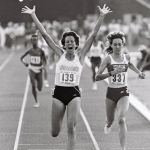 I was just running for place, came up on Mary and I heard those three men’s voices saying, ‘If you’re with her with 200 meters to go you can beat her.’

GCR: Ruth, thank you so much for doing this interview. The timing is right as within the past week you were a part of the 30th anniversary celebration of 1984 Olympics Opening Ceremonies. How was that event and can you believe it has been 30 years?

RW: I have a hard time believing it’s been thirty years. Although my eye opener occurred at the running store where I work as at our old location we had a poster of the 1984 Olympic Trials that Brooks made with the finish of the 1500 meters. I would kind of tend to forget that it was there, but every once in a while I would see someone kind of look at the poster, look at me, look at the poster and look back at me again. One day a few years ago this happened and a guy said, ‘that’s you, isn’t it?!’ And at that moment it clicked that in the picture I was 27 years old and I was standing there at age 54, which was 27 years later. Suddenly it occurred to me that a whole lifetime had passed since that picture was taken.

GCR: How enjoyable was the get-together in Los Angeles with your fellow 1984 Olympians and which old friends was it great to see?

RW: It was very enjoyable. It was put on by the L.A. 84 Foundation which has been an active group for sports. They have an extensive sports library and conduct seminars. My friend, Jacqueline Hansen, worked for them for years. They commemorated the Opening Ceremonies and had Peter Ueberroth and Rafer Johnson there. Rafer walked in this time with the torch. It was great to see other athletes and to realize that the Olympics crosses many lines including lines between other sports. The friendships go beyond just the track. There were some people there I hadn’t seen in a long, long time – Edwin Moses, Danny Harris, Pam Spencer. There was Mary Lou Retton and Rowdy Gaines. It was a casual evening and a great reunion.

GCR: Was there even camaraderie with those who you weren’t close to because of the shared experience and did you find that you made some new friends?

RW: Absolutely. There were a few people that I barely knew or just recognized their names. There were some whom I had connected with on Facebook, but never had person-to-person contact. So it was instantly cool to be friends because of something we had in common. Some were solo back then and now there are husbands and wives along, so we were introduced to that world. I met several Olympians that I hadn’t met before in person, so it was just good.

GCR: I’m sure that when you first became an Olympian it felt great for certain reasons, but now it means a lot for all of your lifetime to be an Olympian.

RW: Definitely. It’s funny because when you are competitor, no matter what you do, it seems you always are trying to be a little bit better than you are. Even if there is an Olympic experience, there is always something more to want. We all wished we had run a little faster, got that medal, run for a few more years or whatever. Now, the more time passes and the more I look back, I realize, ‘Holy Cow! I was one of them!’ At the time when you are living it and even now watching tapes and up close and personal clips of other athletes I think of how they work so hard and are so dedicated. And at the time I never saw myself that way, though I’m sure that’s how it was. It was the lifestyle I chose and I was doing what I wanted to do so I didn’t see it as a sacrifice at the time. Now I look back and think others are so phenomenal and I don’t see me that way.