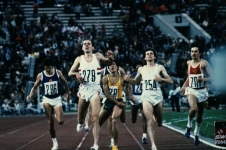 Steve Ovett is uniquely the only athlete to win major championship golds at 800m (Olympics), 1500m (Europeans) and 5000m (Commonwealth).

No other athlete had his unique blend of speed and endurance that as a Junior saw him win national titles at 400m and over six miles of cross country.

And who else would run a half-marathon a few weeks before the biggest race opportunity of his life at the 1977 World Cup?

It is true he cannot match Seb Coe’s Olympic record with a gold and bronze to his rival’s two golds and two silvers and Coe also clearly has the edge in record breaking, especially as that range included multiple records at 800m, 1000m and Mile.

However Ovett arguably had the better competitive record. In 1974 all the way through to just before the 1984 Olympics, not one British athlete beat him at 800m and that included wins over Coe in both the Europeans and Olympics. He ran in three Olympic 800m finals and also gained two European silvers.

From 1977 to the Olympic final in 1980 he won 46 consecutive races at 1500m and Mile and though he lost in Moscow, he still then went on to win a staggering number of races at the longer distances until 1986.

He turned 65 last month and here we pick out 15 of his most memorable meeting performances but if you want to see detailed information of 150 of his best races in chronological order from his English Schools 400m win in 1970 to his Commonwealth gold in 1986 you will need to visit the AW Clubhouse here.

World record holder Seb Coe was a clear favorite for the 800m but the slighter Briton ran a terrible tactical race. Ovett’s race was far from flawless as he managed to barge his way out of trouble a few times on the first lap in a manner that many thought was lucky to survive disqualification. However, he ran a brilliant second lap, following the bursts of first Dave Warren and then Nikolay Kirov. He hit the straight in second but easily passed the Russian to win by around four meters. He covered the last 200m in around 24.9 and last lap in 50.5 as Coe’s late burst nabbed second (1:45.85).

For the 1500m, Ovett was favorite but found it hard to motivate himself and was not helped by running history’s fastest ever first round heat of 3:36.8 to maintain his unbeaten record. In the final at the second attempt, Coe (3:38.40) ran a perfect race, following Jurgen Straub’s burst 700m out (54.2 third lap) and kicking a 52.2 last 400m of his own. Ovett was close to the pair 100m out but failed to even get past Straub (3:38.80), who he had always easily beaten in the past.

Ovett went into the first ever IAAF World Cup as a promising young Brit yet to prove himself at the very highest level but ended it as the world’s most exciting runner. Olympic champion John Walker led down the back straight on the last lap in a fast race but Ovett produced one of the greatest change of paces in history as he blasted an unparalleled 11.8 100m on the final bend. Walker was so shocked, he dropped out on the final bend. Had the Briton run through the line he would have broken the European record as he went eighth all-time with his UK record. Thomas Wessinghage was a distant second in 3:36.0.

He had not prepared specifically for the 800m and had only run one international standard two-lapper in the past two years though seemingly his major rival Coe ran a far too fast 49.32 first lap with Ovett third in 49.9. Coe faded on the second lap and Ovett kicked past in the straight but he was himself shockingly passed by relatively little-known Olaf Beyer (1:43.8), who had actually been ahead of Ovett at the bell.

Ovett’s run was ridiculously portrayed as a failure by some in the press, but it was a British record and ranked eighth all-time in the world and was only 0.6 off Alberto Juantorena’s world record. He still had his main event to go and there he kicked 200m out and despite celebrating early he covered that stretch in 24.8 to win easily from Eamonn Coghlan (3:36.6) and Commonwealth champion Dave Moorcroft (3:36.7). Beyer was ninth.

Making his Commonwealth debut, 12 years after being disappointed he had been overlooked for 800m selection, he won comfortably. The battle for gold proved an all-English affair with Tim Hutchings’ 60.13 lap around 3000m being the major move but Ovett covered that and a 57.3 last lap of his own pulled him well clear of Jack Buckner (13:25.87) and Hutchings (13:26.84), who would go on to finish first and third respectively in fast times at the Europeans the following month.

After effectively missing equalling the record in Brussels in 1979 (3:32.11) by a hundredth of a second as times then got rounded up, here he just about did enough (3:32.09) to get a share of Coe’s 3:32.1 record, in his last major pre-Olympic run. After a slow 57.8 first lap, Steve Scott, who was missing the Olympics because of the U.S. boycott, and keen to make a point to the Brit, blasted a vicious 55.8 second lap. He was still ahead at 1200m but as Thomas Wessinghage went to take over 200m out, Ovett kicked away with an incredible blast of speed in a world record pace run.

He seemed to ease off a little in the straight and waved to the crowd but he still equalled the record. Wessinghage, who was second in 3:33.16 and who moved to sixth all-time, said: “Never have I seen running like that. To run at uneven pace, to fool around and play to the crowd and equal a world record. A year ago I felt we were starting to run closer to Steve. I sensed he was human after all. Now I know I was wrong.”

Having pulled out of the meeting earlier in the week, due to tiredness after Prague, he changed his mind and was then involved in one of the greatest ever duels on a British track. Bronislaw Malinowski led through the Mile in a slow 4:08.8 and they were six seconds down on Brendan Foster’s world record schedule three laps from the finish. Then Henry Rono, who had set 3000m, 5000m, steeplechase and 10,000m world records during the season, started a series of surges to break Ovett but a sprint was followed by a jog and the record looked impossible at the bell (7:17.7). Rono gave it everything down the final back straight but Ovett eased past him at the start of the straight and gave a wave to the crowd. A 55.8 last quarter gave him a world best by 0.2 of a second with Rono (8:14.7) setting a Kenyan best.

Less than a hour after he had set a world 1000m record, Coe lost his Mile record to his fellow Brit. Dave Warren got to halfway in 1:53.5 with Ovett going ahead uncharacteristically early with 600m left. He passed three quarters in an unprecedented 2:51.0, over two seconds up on Coe’s time. He was only marginally ahead versus Coe at 1500m though (3:32.7) but he held his form to nip Coe’s time (3:49.0) by a few tenths. Steve Cram was a distant second (3:53.8) which sealed his Olympic spot.