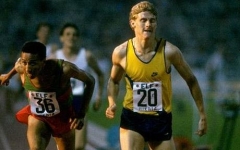 For those who remember Steve Cram as the world’s greatest teenage 1500 meter and Mile runner, it’s hard getting your head around the fact that he has reached the grand old age of 60.

Now one of the world’s most respected broadcasters with a growing reputation as a coach and race organiser, it’s worth remembering that the Jarrow & Hebburn athlete was one of the world’s greatest runners and at his best – you would probably focus more on the five-year period between 1982 and 1986 – one of Britain’s greatest ever athletes.

If it wasn’t for injury, it could have been even more. There were glimpses in 1988 of him being almost back at his best but a frustrating fourth place in Seoul in an injury-ravaged year proved to be his last Olympic and global final.

We have chosen 60 of his best races over the years and you can read about the top 20 below. AW magazine subscribers can find the full 60-strong list in the AW Clubhouse here.

They are not chosen purely on time – for example a 3:33 1500m PR in his development years or a title won is deemed of more significance than a 3:33 at his peak in a grand prix race with pacemakers.

It lasted as a world record for eight years and 35 years later it is still an unchallenged European & British record, and worldwide only three men have run faster.

Cram’s last 400m was 53.4 and it was the biggest advance in the world record since Jim Ryun 18 years earlier.