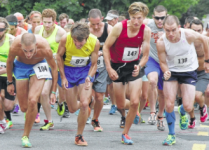 “I just tried to keep up with the guys early on... When we turned the final turn of the race and saw the clock, I realized I had a shot at the record.”

Going into the Jack Daniels Mile foot race on Aug. 6, Ben Robinson had ideas of possibly breaking the course record.

But that’s exactly what she did.

Orrson not only took home top female honors in 4:58, she broke Regan Rome’s record, set last year, by one second.