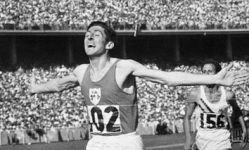 Dark horse Irish athlete relives historic day: “Everything else is shut out, the noise, the crowd. For my entire career I don’t ever remember hearing the crowd… Then I make my one move, around the final bend, begin passing them. And there is no pain. The only time you feel pain is when you’re losing.”

By Ian O'Riordan, The Irish Times

The thing about sporting records is that for all the replay buttons and digital archives at our fingertips these days, nothing can replace living memory. Especially when that memory is as sharp today as it was 60 years ago – and why no one can describe the Olympic 1500 meters in Melbourne better than Ronnie Delany.

He sees it more clearly now, as it turns out. Aspects of the race were lost on Delany on the day, given his trance-like concentration; certain components of his performance got somewhat lost at the time. In ways it’s even more impressive now than it appeared on December 1, 1956.

It’s late afternoon and hot inside the Melbourne Cricket Ground when the field of 12 finalists are called to their marks. The crowd of 120,000 are anticipating this as the proper blue riband event: interest in the 1500m, the metric Mile, has reached a fever-pitch zenith, and in the two years since Roger Bannister had broken the barrier of barriers – the 4 minute Mile – only nine other men have followed suit.

Six of those are now on their marks (Bannister, fittingly, is sitting amongst the crowd, having retired not long after his 1954 breakthrough). The youngest of them is the 21-year-old Delany, who six months previously ran 3:59.0 in Compton, California.

The favorite, and not just for the Melbourne crowd, is the 26-year-old Australian John Landy, who had lowered Bannister’s Mile world record to 3:58.0. Britain has three finalists, including Brian Hewson, and while there’s a sense any one of the 12 might win, Delany is the dark horse.