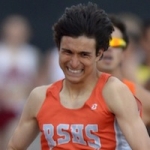 By Marc Bloom for Running Times

Ricky Faure of Rock Springs (Wyo.) High School, currently the nation's leading combined 800m runner and Miler, is looking to run sub-1:50 and 4:05 this spring after launching his season with an Arcadia Invitational Mile victory in California earlier this month. Faure, an 18-year-old senior, travels throughout the West for races. Training and living at 6,500 feet, Faure hopes the altitude boost will continue paying off in sea level races.

Arcadia Title: Despite winning the Arcadia Mile against a national-class field in a PR of 4:09.32 on April 12, Faure (pronounced “four”) says the race was less than perfect; he hung back offering little fight for the first three laps. “I was not as focused as I wanted to be,” he says. With a lap to go, Faure took off and burned a 59-second last 400m, gritting his way down the stretch. He says he felt capable of 4:05 that day.

Mile Streak: With his second straight Simplot Games 1600m title in Pocatello, Idaho, in February, in 4:10.22, Faure has a string of big race victories to his credit. He is undefeated this year, indoors and outdoors, in the middle distances. Faure’s next shot at 4:05 or better could come at an invitational in Utah in May.