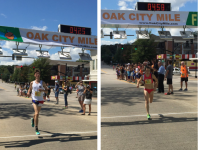 $2300 in prize money was handed out at the Inaugural Oak City Mile; both Isaac Presson (4:25) and Andie Cozzarelli (4:58) won state titles with convincing leads over second place.

It was a beautiful afternoon for the inaugural Oak City Mile on Sunday, September 13th in Downtown Raleigh. Temperatures in the low 70’s, low humidity, and a slight breeze highlighted the new course that started on Hillsborough Street, near the end of Glenwood Avenue, and ran around the traffic circle at Morgan Street and back. The event carries on Downtown Raleigh’s longtime road Mile tradition, and saw runners with local ties take the North Carolina USATF State Titles. The event was also a ‘Bring Back the Mile’ Featured Event.

In the Women’s Race, Apex High and North Carolina State graduate, Andie Cozzarelli, took the win in 4:58. She was followed by former Boston University All-American, Marisa Ryan (5:07), and recent Duke graduate, Abby Farley (5:09). In the Masters division, Winston-Salem took the top spots with Robyn Holland (5:35) finishing just ahead of Betsy Armentrout (5:44) for the State Title.

The Oak City Mile is managed by Precision Race. The Jim “Catfish” Hunter Chapter of the ALS Association is the designated charity for the event. Gold Sponsors for the event were Runologie, who provided awards, and Raleigh-based investment advisory firm, CAPTRUST. Bronze sponsors for the event were State of Beer, who hosted the post-race party, and Bay Six, who provided unique ‘Race Singlets,’ in contrast to the standard race t-shirt. Sir Walter Running provided publicity and elite athlete management for the first year race.