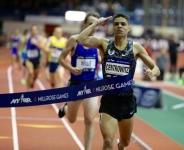 “I’m kind of excited about a couple of things,” Centrowitz said. “One is about racing some of (coach) Jerry Schumacher’s guys (Hill and Ahmed). I’ve heard they’re going out to run a fast time, so it sounds like it will be set up for a fast race. There are not many opportunities to run a 2 Mile, especially against those guys.”

Centrowitz, 27, ran 3:50.63 to win the NYRR Wanamaker Mile in 2016 and that time held up as the fastest Mile in the world last year. The University of Oregon grad opened his 2017 season with a strong 7:49.89 clocking for 3000 meters at the University of Washington Indoor Preview on January 14 in Seattle.

By moving up in distance, Centrowitz said he is aiming to become more versatile and would like to keep his options open by the time 2020 comes around.

“As long as I’m having success in the 1500 meters, which is such a signature event and fan favorite, I’ll stay with it,” Centrowitz said. “I have spoken to (coach) Alberto (Salazar) and it’s no secret that I’ll probably do a 5K this outdoor season. If I do move up down the road it won’t be such a foreign event, but a lot of my training is strength-based anyway.”

The Paavo Nurmi 2 Mile is an NYRR Millrose Games event named for the famous “Flying Finn,” who won a record nine Olympic gold medals from 1920 to 1928. In 1925, Nurmi came to New York City and broke the world record in the 2000 meters at The Armory. The event is also supported by Finland’s Paavo Nurmi Games, which celebrates its 60th year on June 13.

For Centrowitz, it means twice as many laps and twice as much time in front of an enthusiastic NYRR Millrose Games crowd. The American record of 8:07.41 by Centrowitz’s Nike Oregon Project teammate, Galen Rupp, could be in play.

“I’ve noticed that I do a lot better when I put myself in a race to try and win rather than go for time,” Centrowitz said. “I’m pleased where I’m at right now. I feel like I can run a fast time. Eight-oh-seven seems like a strong record. It’s only four seconds off Mo (Farah’s) world record. But if some of those guys get around that (pace) and I’m competitive I could be near it. But I’m more concerned about trying to beat those guys.”

Centrowitz’s entry makes it 12 Olympic gold medalists who will be competing at the NYRR Millrose Games.

Go to NYRRMillroseGames.org to learn more about the NYRR Millrose Games and to purchase tickets to the February 11 meet scheduled from noon to 6:00pm.