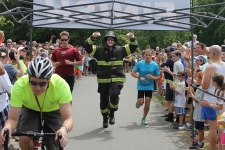 Brendan Corcoran, 37, broke the existing Guinness record by more than a minute with a time of 6:45 while wearing 25 pounds of gear.

For the second time in just over two months, fire lieutenant Brendan Corcoran, 37, of Ridgewood, New Jersey, has set a pending Guinness world record for running a race in full firefighting gear. At Monday’s Fred d’Elia Memorial Day Ridgewood Run, he covered a Mile in 6:45 while wearing 25 pounds of gear, smashing the old record of 7:58.02. At the end of March, he set a pending half marathon record of 1:48:24, surpassing the previous record by more than 12 minutes.

It was the hardest 6:45 Mile of Corcoran’s life. He doesn’t usually race the Mile—he considers himself more of a triathlete and prefers longer road races—but he predicts that he could probably run at least 4:40 without the gear.

“It’s fair to say that it slows you down a couple minutes a Mile for sure, if not even more,” he told Runner’s World Newswire.