As I looked over at the clock and saw 3:59.97 next to my name, I was completely euphoric. Seconds earlier my body was as heavy and exhausted as it had ever been. In an instant, I felt immortal.

The story of my first sub-4 Mile began at Boston University in February 2009, when I was a freshman at the University of Maine. I ended my high school career with modest personal records of 2:02, 4:16 and 9:38. My team was competing at the BU Valentine invitational in Boston, my first big college race. Two weeks before, I had run a Mile PR of 4:15, and that was good enough to get me in the 4th of 12 heats that day. I finished my warm-up 35 minutes prior to my race, just in time to watch the fastest Mile section of the day. Dave McCarthy and Hayden McLaren of Providence went to the front of the race immediately. The two of them swapped leads every two laps, clipping off sub-60 second quarters with what seemed like absolute ease. As they came off the final bend, the building was electric. I watched in complete astonishment as the two of them crossed the line at 3:57. I had just witnessed my first sub-4 Mile.

My race was called to the line shortly thereafter. As the race was happening, I remember seeing Dave and Hayden still standing in the outer lanes, taking pictures and celebrating their impressive run. I hardly remember how my race actually unfolded that day. I finished a close second to a runner from West Point in a PR of 4:08. I had just lowered my best time by 7 seconds and I was completely unsatisfied. As I cooled down, I thought to myself “I need to be in the first heat at this meet next year. I want to run like those guys.”

Fast forward to my sophomore year. I redshirted that fall after dealing with some tendonitis in my knee. I was eager to race after sitting out a season. I was eager to run fast indoors. Shortly after Christmas break something started to happen in training. For several weeks I felt like I was in a permanent flow state. I was invincible in every workout, on every run. My entire life seemed to be in perfect balance.

Two weeks before our team was scheduled to compete at the BU Valentine Invitational, I sat down with my coach, Mark Lech, and explained to him that I wanted to break 4 minutes in two weeks. I wanted to be seeded fast enough to be in the first heat. This was the first time I had said it out loud. Mark looked at me in mild bewilderment. While I had been running well lately, my personal best had only been lowered to 4:06 at that time. However, that wasn’t his primary concern when he heard this lofty goal. “Riley, you have never broken 2 minutes for the 800. How about we start there?”

The University of Maine hosted a dual meet with Holy Cross University the week before the Valentine Invitational. Sure enough, I was entered in the 800. I made quick work of the race and ran 1:54, breaking 2 minutes for the first time. I went up to my coach and said, “OK, now will you seed me well?” Looking back, I was a hothead. Nevertheless, Mark agreed to advocate for me to be in the fast section the following weekend. (While a 1:54 800 is relatively unimpressive for someone trying to run under 4 minutes. I have always found this part of the story funny. I had never run a half mile as fast as I was attempting to come through for a Mile, a week before.)

Every runner has done an “indicator workout”. A workout designed to determine how fast you should be able to run at a certain distance. Typically these workouts are limited in volume and even more limited in rest. The Tuesday before I was set to race, Mark showed up to the track with my workout written on a piece of paper. 4 by 400 in 59 seconds with 20 seconds of recovery between each rep. Perhaps it is because I live at altitude now and the idea of 20 seconds of recovery is crippling, or maybe because I am now approaching my 30th birthday, this workout sounds hard. Fortunately, as a cocky, naive 19-year-old, I handled it well. 59, 58, 59, 59. It was time to race.

Sitting at breakfast the day of the race on February 13, 2010, my friend Spencer and I looked over the field that I would be competing against. Brad Miller of Syracuse was the class of the field. He had run 4:00 2 or 3 times already and DyeStat had recently published an article about him and his twin brother Craig who was a 3:56 Miler at Wisconsin at the time. I had not shared with any of my teammates that I wanted to break 4. I was afraid that they would tell me even considering the idea is preposterous for someone who had only run 4:06. Spencer looked up at me after reviewing the start list and without saying anything I could tell hat he understood what I wanted to accomplish that day. The moment felt like what I would imagine a pitcher feels with his teammates in the dugout during the 8th inning of a no-hitter. A calming, palpable feeling of support without anything being said.

When I showed up at the track that day, I wasn’t anxious. I was confident. I understood what I was capable of and knew I was going to have the opportunity to prove to myself that I could. Boston University has become a hotspot for anyone looking to run fast. The majority of the best athletes in the NCAA, however, were in Seattle at the University of Washington, the place to run fast in 2010. Besides Brad Miller and Sean Quigley, a 5K-10K guy who was running professionally for Puma at the time, this was a relatively low-key field. This made me feel even more confident as I warmed up.

I stepped to the line, the gun goes off and we are on our way. As confident and excited as I was that day, several other athletes in the race seemed to be more excited and more confident as I quickly found myself in the back of the field. “Oh no, why did I ask for this? I am going to get killed.” I thought to myself while I looked up to see 7 or 8 athletes in front of me. Before I knew it we were passing through 209 meters. 29, 30. “What am I doing? I can run 29s all day.” I say to myself as I move up through the field, passing 4 runners on the back stretch. I look up and see the professional Puma kit of Sean Quigley right behind Brad Miller. “OK, he’s a pro, I’ll settle in behind Sean.” We hit the first quarter mile: 58.5.

This was significantly faster than I had ever run the first quarter of a Mile before. I was on sub-4 pace. “Alright, we’re doing it. I am in a good spot and I feel good. Good job, Riley.” Rylee Miller of Syracuse Elite was pacing that day. Brad Miller and Sean are right behind him and I am staring directly at their backs. We had gapped the rest of the field. We approached halfway and the pacer stepped off: 1:59.

“Strange. I assumed the pacer would go much further. Oh well, we are still on sub-4 pace.” I think, as Brad Miller takes the lead. Again, Brad had run 4:00 a couple times before. The article I read that morning made me feel confident that he would be the guy to lead me to the other side of 4 minutes. We hit 1000 meters and the clock reads 2:30 as we pass by. “Wait, is he slowing down? That cannot be right. If I am going to break 4 today, surely he is too. He has been here before.” As we made our way down the back stretch I could feel someone coming up from behind me. We had slowed down and the chase pack was catching us. Even worse, I was about to be boxed in as we hit 400 to go: 3:00.

I’m not sure what came over me at that moment. 4 minutes was slipping away and I was furious. I threw myself into lane 2, moving completely lateral before shooting forward to the front of the race. “I am going for it! I feel good, I can run a 59 second quarter in my sleep.” I could feel Brad right behind me as I approached 200 meters to go. 3:30 on the clock, we needed to close in 29 seconds. “Not a problem,” I thought to myself as I accelerated into the first turn. The next thing I know, I am staring down the backstretch thinking “This hurts! My legs weigh a ton. Just hang on.” The crowd was roaring as I made my way around the final bend and moved down the homestretch. There’s the clock, 3:56, :57, :58 :59, I lean for the line and look for the scoreboard on the far side of the track. 3:59.97! 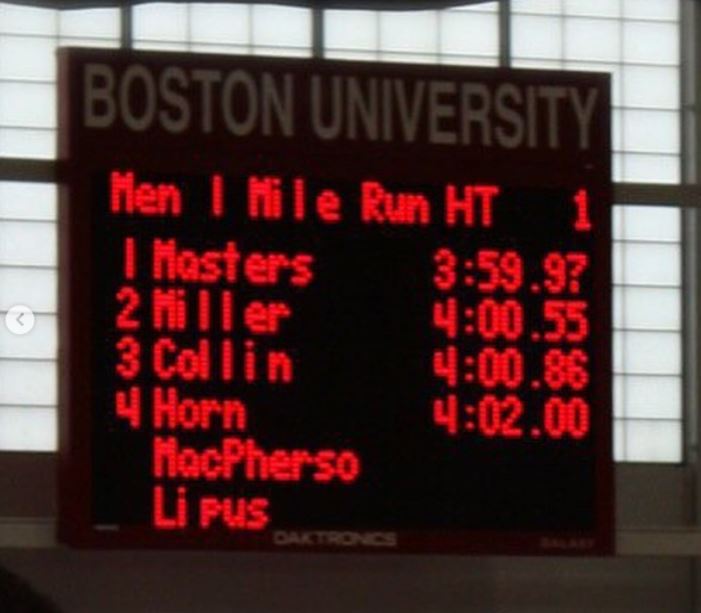 Ten years later, another 200-plus Americans have run under 4 minutes for the first time. There is a sense that the allure of running a sub-4 Mile has somewhat diminished. Although, at that moment, as I looked over at the clock and saw 3:59.97 next to my name, I was completely euphoric. Seconds earlier my body was as heavy and exhausted as it had ever been. In an instant, I felt immortal. The possibilities of what I could accomplish seemed endless and I felt like I belonged.

EDITOR’S NOTE: Riley Masters became the 335th U.S. man to record a sub-4 minute Mile and the first Maine native to do so. He also holds the state Mile record with his 3:56.15 indoors from February 2015.

Masters won the 2016 Bring Back the Mile Grand Prix Tour title and was a volunteer assistant coach on the University of Colorado women's team that won the 2018 NCAA Cross Country Championship.

FUN FACT: Riley and his wife Sara Sutherland are one of the fastest married couples in the Mile with a 4:13.38 average.