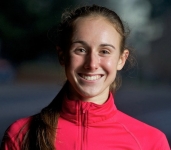 Many of the top high school middle and long distance athletes from across the country will be racing this weekend at The Armory for the New Balance Nationals Indoor, making for a meet to remember.

Boys Mile:
The big matchup here pits U.S. #1 Luke Gavigan (NY) against Foot Locker Cross Country champion Grant Fisher (MI), a USA team member at World Youth last summer. Gavigan clocked a blazing 4:08.96 to win the New Balance High School Mile at the NYRR Millrose Games, a win on his home track that he considered the biggest of his career. A national title from New Balance Nationals would surely rank right up there. Fisher broke 3:50 last summer for 1500 meters and deserves to be rated a co-favorite.

No other athlete in the field has broken 4:12 this season, though a handful are right around the 4:13 mark. Garrett O'Toole (MA), has recovered from an injury- plagued cross country season and is ready to improve upon his 4:12.91 clocking from the USATF New England Championships. Also from Massachusetts is Newton North's Gabe Montague, who won the MIAA State Championships 1000m in a new meet record of 2:27.78.

Tennessee's Wesley Pectol and New York's James Burke have both broken 4:14 this year.

Girls Mile:
If the NYRR Millrose Games was any indication, we can expect a meet record to fall in the girls Mile, as Camas, WA, junior Alexa Efraimson (above, right) returns to The Armory. At Millrose, ace Efraimson held her own against a field of top professionals and collegians in the Wanamaker Women's Mile, finishing in 4:32.15 -- the second fastest prep time in history only behind teen phenom Mary Cain. Fastest in the New Balance Nationals field by more than ten seconds, Efraimson should challenge Cranny's 4:40.62 meet record from a year ago.

Efraimson has further proven that she is the top high school distance harrier in America by clocking 9:00.16 for 3000m this year and winning Nike Cross Nationals in 2013. It would be a surprise if she wasn't on top of the medal stand in New York.

Of course, other competitors could have a great day and challenge for the win. Weisner, second at the NYRR Millrose Games High School Invitational Mile, returns with a 4:48.16 season best; she finished sixth as an All-American last year in the Mile. Mady Clahane (PA), Maddy Berkson (RI), and Kelly Hayes (NY) are ranked seventh, eighth, and ninth in the nation this year, and all have shown promise in the event. Of the three, only Clahane has dipped under 4:50 indoors in 2014. Berkson is also entered in the 400 and 800.