More than a Coach: László Tábori 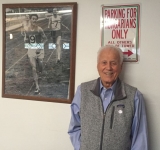 He said I’d have lots of friends when I am #1 on top, but that he would there for me when I’m not.

When I reflect on life, I think of Joni Mitchell. She is my favorite female artist and poet. She wrote “We’re captive on the carousel of time. We can’t return, we can only look behind from where we came. And go ‘round and ‘round in the circle game.”

On July 6, 1931, László Tábori was born in Kosice. . . the Slovakia part of Czechoslovakia. Coincidentally, one week earlier, on June 29, 1931 a certain Tom Sturak was born in San Diego of Slovak parents whose family resided in Kosice.

Fast forward to the late 50s, early 60s, Laszlo and Coach Igloi were training in Southern California. You’ve all heard or read of their journey to California, so I’ll leave that to you and others to research. But I will add that a certain Tom Sturak was also running with Coach Igloi in that time-period, and then with Joe Douglas for many years after for Santa Monica Track Club. More about Tom later.

In the late 60s, 1969 to be exact, I was out running one day around my school, San Fernando  Valley State College. I had discovered Track & Field thanks to a forward-thinking woman coach at Granada Hills High School who started the first girls’ track team at my school. I’d already bombed at every other sport and was happy to join a team that didn’t choose you, but you chose your event. I went from high school to Pierce where I had a team, but not a coach, and although we competed on a women’s team, we also went to the men’s meets where I was the scorekeeper. At San Fernando Valley State, which became Cal-State University, Northridge by my graduation,  I had no team and no coach, but I kept running. It was a random act of fate that I met Judy Graham running, and we became friends. She gave me a lifetime gift when she said I have a club and I have a coach. You can join.

Laszlo was more than a coach. I learned all life lessons through this man, all the life lessons sports can teach you. I learned “work ethic” the very first workout. Judy can attest to the fact that just the warm-up was more than I’d ever run at one time. I was in over my head. But Laszlo’s commanding presence made it impossible to leave and when he said he would see you next time, you knew you better be there next time.

I learned dedication, commitment and sacrifice.

I learned you never quit, you always finish what you start. I learned that in the first race. He took Judy and I to a cross country race in Ventura. I collapsed from fatigue and tripped over my own tired feet. I lay in the dirt wishing an ambulance would come take me away on a stretcher, but that didn’t happen. I might have heard, from the sidelines, barking orders to get up and finish because that’s what I did. You always finished what you start.