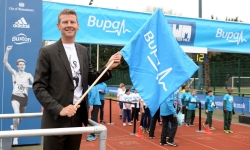 “The Mile holds a very special place in my heart and it’s wonderful to take part in this race alongside so many of my fellow Olympians on such a special day." - Steve Cram

Steve Cram (right), Denise Lewis and Basil Heatley are set to be among the more than 90 British Olympians taking part in a special Mile event at the Bupa Westminster Mile on Sunday, May 24 in London.

Britain’s oldest living Olympian, 98-year-old Bill Lucas who ran in the 5000m at the 1948 Games in London, is to be the official starter. Many of the Olympians will be wearing their official Great Britain kit for the event.

This year’s Bupa Westminster Mile celebrates the 30th anniversary of Cram’s world Mile record of 3:46.32 which he set in Oslo in July 1985. That mark still stands as the British and European record.