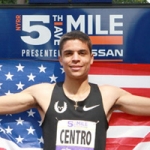 He'll shoot for win and sub-3:52 at the Millrose Games.

Matthew Centrowitz, 23, won the Wanamaker Mile at the 2012 Millrose Games in 3:53.92. He returns to the Games on Saturday at the Armory in New York with Bernard Lagat’s Wanamaker record of 3:52.87 as his target. In 2011, while a University of Oregon undergraduate, Centrowitz was the NCAA 1500-meter champion and the bronze medalist in the world championships. He was fourth in the 1500 at the 2012 London Olympics. On February 2, he won the Mile at the New Balance Indoor Grand Prix in Boston in 3:56.26.