Matthew Centrowitz takes lead, and then gold in Olympic 1500 meters 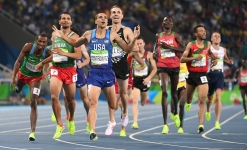 "I came into this championships with a different mind-set. Thought to myself, I’m in great shape. Just run to my capability. It wasn’t a redemption thing for London. It was about being the best I could be on this day.”

So even though Matthew Centrowitz led from the start of the Olympic men’s 1500 meter race Saturday and only briefly allowed another runner to pull in front of him, he still crossed the finish line a bit uncertain about what had just happened.

“I literally was still looking at the board, like, did somebody go by me? Did I really just win? Did I really just hold that caliber of a field off in the Olympic final?” Centrowitz said later. “I could not have scripted it any better.”

Someday the shock might wear off, but the wave of emotions that swept over Centrowitz will linger for a long time. The Arnold native won the race with a time of 3:50.00 to become the first American to claim Olympic gold in the 1500 in 108 years.

“I thought on the best day I could maybe get a silver medal,” Centrowitz said later. “Sure, in the back of my head I thought I could get a gold. But I would’ve been very, very happy with a silver.”

After crossing the line, the 26-year-old Centrowitz took an American flag and circled the track, slowly processing how far he had come: a five-time All-Met at Broadneck High in Annapolis, a promising middle-distance runner at the University of Oregon, a runner who dealt with the frustration of just missing the podium four years ago at the London Games. He spotted his father, Matt Centrowitz, the two-time U.S. Olympic team member who coaches cross country and track at American University, in the stands and yelled, “Are you kidding me?”

“Are you [expletive] kidding me?!” the elder Centrowitz yelled back.

“We just kind of went back and forth,” the runner recalled later with a chuckle. “I don’t think any of us believed it.”

The surprising win marked the United States’ first gold medal in the 1500 since Mel Sheppard’s victory in the 1908 Olympics. Centrowitz employed a smart strategy that netted him gold but also resulted in the slowest winning time since the 1932 Games in London. 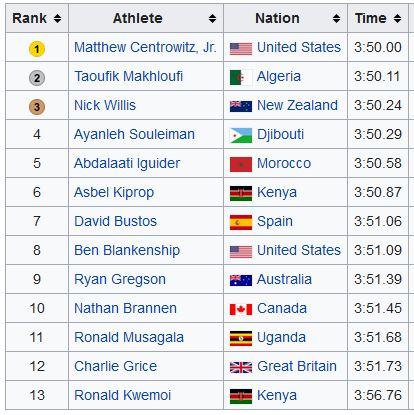