Making the Most of Your Mile: Ryan Shay Mile 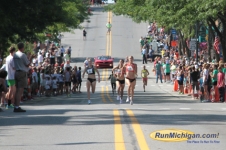 Presented by HOKA ONE ONE, the interview series speaks with race director Matt Peterson about the Charlevoix running community, Ryan Shay and Saturday’s 7th Ryan Shay Mile, the third stop on the Bring Back the Mile Grand Prix Tour 2014.

In 2007, Matt Peterson, Douglas Bergmann and Doug Drenth took over the Jeff Drenth Memorial 5K & 10K Foot Races that take place in Charlevoix, Michigan during the annual Venetian Festival. Each year, this small town of 3,000 people gather for a week-long “flurry” of carnivals, live entertainment, boating parties, kids games, parades, fireworks and more. Since then, they have expanded the event to include an invite only elite Mile along Saturday’s parade route to honor the late Ryan Shay. So, three former teammates from Central Michigan University set out to create an invite-only elite Mile and seven years later have turned it into a destination for many top distance runners who compete for a $4000 guaranteed prize purse.

BBTM: So, Matt, how did you get started with the Ryan Shay Mile?

Matt Peterson: Seven years ago two former teammates of mine, Douglas Bergmann and Doug Drenth took over the local 5K and 10K race which are called the Drenth Memorial Foot Races and we wanted to add a road Mile to it. When we were younger we would watch the 5/3 Bank Golden Mile  at the Cherry Festival, which is about 15 Miles South of here. We always loved watching it and were inspired by it. So, we wanted to do the same thing in Charlevoix.

BBTM: At what point in the creation of this event did the idea of honoring Ryan Shay come about?

MP: It began when we were trying to think about a good name for the race. And all of us had either known him or met him and thought what better way to honor him than with an elite running event. We thought it might be something that he would have appreciated. So, we approached Joe and Sue Shay about it and had their full support.

BBTM: Ryan was more of a distance runner known for the longer events. Why the Mile?

MP: Ryan was known more for 5000m, 10,000m and marathons, but again we just wanted to honor him in some way and the Mile is the universal distance for both people that are really into running and for those who don’t really know much about it. The Mile is a universal distance. Even people that might not be fans of running have probably heard that running under 4 minutes for the Mile is good. Or, if they haven’t heard it they have heard something about it; they understand the distance.

Just last week someone asked me how many people are going to run under 4 minutes. And that was from two people who didn’t know much about running but they know under 4 minutes is a good men’s time and for women around 4:30.

BBTM: How do you honor Ryan on the day?

MP: In honor of Ryan, we invite Joe and Sue Shay to attend the event every year and make them a big part of that day. They are the official starters of the race, but even before that they both help check-in runners, they help with the introductions and usually shake hands or give a hug to every athlete before their race.

BBTM: For the 7th Ryan Shay Mile, you have two great fields with talented racers including the “Road Mile Queen” Heather Kampf. What did you do over the years to build up the quality of the fields?

MP: I think that the fields naturally get a little better every year. Of course, we have maintained connections with a list of Division I coaches in the midwest that talk to. But as far as recruiting goes, we just post things on letsrun.com, which I know is simple, but since the first year we have done that, people just keep contacting us. Partially because the area of Northern Michigan that we are in is simply beautiful. Our registration is right on Lake Michigan!

But, I think that the main draw is just that people want to come and honor Ryan and his legacy.

BBTM: You guys have sponsors and lodging partners that help to make this event profitable for elite runners. How did you make this happen?

MP: To be honest, this is a true community event. Charlevoix is a very small town of 3,000 residents and all of the hotel nights are booked up on this weekend because of the festival. So, we have about 10 to 20 families who provide housing for our athletes every year. Some of them are local residents, others have summer properties, but they all open up their homes and embrace the event. And, our title sponsor, Bergmann Marine, pitches in $4000 of the prize money.

You know, it takes many people to help put on this event. We have some old teammates who drive hundreds of miles to the event. We have high school teams and numerous other people in Charlevoix that volunteer.

MP: Douglas and I talk about this all the time. There is a pretty strong running community in Northern Michigan. This little town has had numerous state Cross Country Championships. The Central Lake area where Ryan Shay was from has a really strong running heritage. The local people have really embraced the event. Each year after the event I have people coming up to me making sure that we are having an elite Mile again next year.

Even people that don’t know anything about running line the streets four and five deep. I think that if we didn’t have these Mile races they would really miss it. We hand out thousands of bells and hand to the people along the parade route. It’s pretty exciting.

BBTM: That must provide a great atmosphere and conditions for the athletes to race well.

MP: Definitely. The biggest kudo we received is that we’ve had people say the last half Mile of the race is as good of an atmosphere as any high profile race they have run. Out of road Miles and international track races, anything. Specifically the last quarter Mile, there will be people lined up along the road to watch this and it is literally a roar of a crowd when these runners come down the incline to the finish line. We have had people that have run road Miles or middle distance events around the world and said that energy the last quarter Mile is really exciting.

For more on the event including newsfeed, go to: Ryan Shay Mile