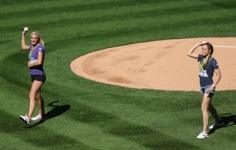 Since the competitive season ended, the Boulder-based teammates have enjoyed parties, appearances and a trip to the White House

Jenny Simpson and Emma Coburn each came out of the Rio Olympics with historic performances for the United States. Coburn won the country’s first-ever medal in the women’s 3000 meter steeplechase with a bronze, then Simpson earned a bronze of her own in the 1500 meters—also America’s first-ever Olympic medal in the women’s event. But how do athletes follow up such momentous accomplishments?

In the case of this duo, teammates coached by Mark Wetmore and Heather Burroughs in Boulder, Colorado, they continued competing in Europe, ran one last race at the Fifth Avenue Mile in New York (Simpson won), and then they began a long-awaited celebration by talking to elementary school-aged children, throwing first pitches, being honored at the University of Colorado football game and even traveling to Washington, DC to meet the president.