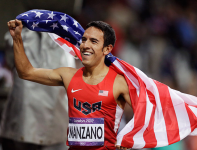 “You can be the best guy coming into those races, and then for some reason, something happens....When you make it to the final, just believe because anything can happen.”

The World Championships are Aug. 22-30 in Beijing.

But making this squad might have been one of the toughest challenges of Manzano’s career.